Those who have tried to quit smoking cigarettes know that it is no picnic. Nicotine has been called by researchers potentially more addicting than heroin. Although the Centers for Disease Control and Prevention report that 70% of current smokers want to quit, they have been unable to do so. According to the American Lung Association, successfully quitting smoking and “staying quit” is a difficult process that often requires multiple attempts, and that often requires the intervention of counseling or anti-smoking drugs or both before it succeeds. 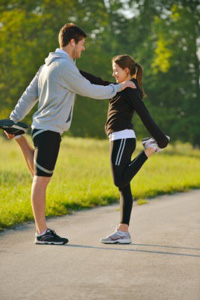 Good news for those trying to stop smoking comes from a number of recent studies, which indicate that one thing that may significantly help smokers to quit the habit and “stay quit” requires neither counseling or drugs. It requires only getting up off the couch and exercising.

In an Austrian study, 68 volunteers who were trying to quit smoking by using nicotine gum or skin patches were divided into two groups. Half of the subjects exercised regularly, while the other half did not. At the end of the three-month study, 80% of the people who exercised had quit smoking and remained non-smokers, while only 52% of those who didn’t exercise were able to successfully quit without relapse.

In another study recently published in the journal Addiction, research from 19 previous smoking-cessation clinical trials was examined. The researchers found that the exercise significantly helped those who hoped to quit smoking to overcome their cravings for nicotine. The people studied – none of whom in this study were involved in any kind of counseling program or were using nicotine replacement therapy – universally reported that they had less desire to smoke after working out than they did before.

A third study from Taiwan provides some of the most compelling evidence yet of the value of exercising when trying to stop smoking. Reviewing health data from 434,190 subjects, the researchers found that the exercisers were 55% more successful in quitting, and 43% more successful in avoiding relapse, and becoming smokers again.

Almost more important, this study – using long-term data that included mortality statistics – revealed benefits even for those who didn’t successfully quit smoking. Smokers who exercised and successfully stopped smoking increased their life expectancy by 5.6 years. But those who exercised regularly and weren’t able to quit still increased their life expectancy by 3.7 years.

What does this mean in practical terms if I’m trying to quit smoking?

First, it means that regular exercise will increase your chances of being able to quit. Second, it means that exercise will improve your overall health even if you don’t succeed in quitting. Third, “exercising” does not necessarily mean going to the gym every day or running marathons. Benefits were seen in reducing nicotine cravings and in the ability to stop smoking simply from walking or performing similarly mild exercises several minutes a day. Exercising while attempting to stop smoking also helped to avoid weight gain, because it decreased the subjects’ appetite and reduced any signs of depression, which is often “self treated” by eating more.

So you don’t have to train like an Olympian athlete to help your chances of becoming a non-smoker. Taking a walk at lunchtime or after dinner – times when you used to smoke – can help tremendously. If you’re at work and the desire for a cigarette threatens to overwhelm you, stand up and do a few deep-knee bends or walk up and down a few flights of stairs. Although if you’ve been a long-term smoker you may experience some shortness of breath when you first start exercising, that quickly goes away, because your lung function is improving with every day you don’t smoke.

Sticking with a regular exercise program is difficult in itself, but we do it because we know it’s better for our health. As it now turns out, it can also help us to overcome something that is extremely detrimental to our health – smoking. That gives the exercise a double “payoff,” and may help us to keep it up.