If you’re at all like me, the term “Wake up and smell the coffee” isn’t an epithet you hurl at someone clueless, it’s a description of our everyday morning routine. There is really nothing quite like the scent of freshly brewed coffee.

Unfortunately, especially if I have to get my coffee from a Starbucks, which true coffee lovers sneer at because they over-roast their beans and thus turn the coffee more bitter than it should be, the first taste of coffee as it hits my tongue is not always as great as the smell of it. And statistics say that I’m not alone in feeling this; a large percentage of coffee drinkers feel that the smell of their coffee is more pleasing than the taste of it. What’s up with that?

We actually have two senses of smell 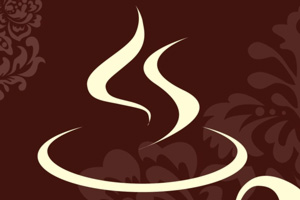 One is the one we’re most familiar with, the one that originates in our noses when we breathe an odor in from the environment. Scientists refer to this mode of smell and taste (because the two senses are linked…if you doubt this try eating something fragrant while holding your nose, and see if it tastes the same) as orthonasal. It’s what happens when scents enter our noses directly.

But there is another type of smell that happens when something we eat or drink hits our tongue and our palate. This is called retronasal smell, and happens when we breathe out something we are chewing or in the process of swallowing. The resulting smell-taste combination is not always the same as what we sense while sniffing the food item directly. Eighty percent of what we think of as taste is actually determined by smell receptors in our noses picking up the retronasal odors of what we are eating.

Besides coffee, another example of this disparity between orthonasal and retronasal smell happens when we eat certain fragrant aged cheeses like a French Epoisses de Bourgogne. Sniffed directly, they may smell…well, let’s face it…disgusting. But overcome that and actually taste them, and the cheeses themselves taste sweet and delicious. The disparity with regard to coffee is happening in the opposite direction; for most people the direct smell is more pleasant than the taste-smell combination. With coffee, this is partly explained by the fact that its complex aroma is caused by a combination of over 600 chemicals, over half of which are instantly destroyed by the saliva in our mouths, causing its taste-smell flavor to change before we swallow it.

• Out of all the tens of thousands of aromas in the world, only two are known to be interpreted the same way by humans whether they enter the nose directly or via retronasal smell – chocolate and lavender.

• The sense of smell is least acute in the morning, and increases in its ability to perceive odors later in the day.

• Three months after seeing the original image, humans can recall photos or visual impressions of one accurately only 50% of the time. But we can recall odors with 65% accuracy over a year after having first smelled them.

• Your sense of smell is as directional as your hearing, meaning that you can tell where the smell is coming from in your environment.

• Human beings can, on the average, accurately recognize over 10,000 different odors.

• Our senses of smell and the olfactory sensors that drive them are so sensitive that we can detect almost infinitesimal amounts of an odor. For example, when you are out in the forest and catch a whiff of skunk, what is registering as that smell is less than 0.000,000,000,000,071 of an ounce of skunk scent.

• “A rose by any other name may smell as sweet,” but it doesn’t smell the same to any two human beings on the planet. And in fact, our ability to detect odors changes from day to day depending on our physiology, so we don’t even smell the same rose the same way twice.