The idea of abdominal stimulators/ab belts is certainly an appealing one. The general idea is that you put the belt around your waist, you sit and watch TV, rinse and repeat (even rinsing is optional) and then you end up with rock hard abs that would make Brad Pitt jealous. Of course it’s also an idea that sounds a little too good to be true, and experience has taught me to be jaded in such matters. But then I saw a clip of old Bruce Lee using one, and he had pretty good abs… so could it be true? 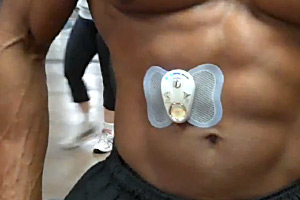 In principle the ab belts should work just fine. The basic idea is simply that you strap a belt around your abs and that this then delivers tiny little electric shocks. Because your muscles run on electricity (tiny little electrical signals between your muscle fibers tell them what to do) this then means that your abs will tense hard each time the current runs through the region. And that tensing then is surely just like tension your muscles while training… so that will do it, right?

Well of course the answer is not quite – as actually it takes more than just tensing your muscles to develop size and definition as you might imagine. What’s most important in fact is that your exercise is tough enough to cause microtears, which are microscopic tears in the muscle fiber that then stimulate the muscles to grow. Essentially working out is a process of damaging yourself and then healing to come back stronger, and unfortunately the power and the duration of the electric shocks that you get from an abdominal belt aren’t enough to have much impact. For it to work it would need to be very painful.

Meanwhile there’s another problem – that being that you can’t really just train one part of your body in isolation without training the rest. If you did it would lead to bad imbalances that would leave you prone to injury, and training just your abs wouldn’t leave you with a good looking six pack because there wouldn’t be any definition for instance at the sides in the obliques – your abs would just be ‘floating’ there in the middle.

And apart from all this, it’s not even like getting super strong abs is going to give you a six pack on its own anyway. What’s far more important is that you burn fat on your stomach so that there is as thin a layer as possible between your six pack and your flesh. And to achieve this you need lots of CV – lots of running around and definitely not just sitting on the couch.

It’s not all bad news for ab belts though – they still do have some uses. For instance if you are recovering from an injury that is preventing you from exercising, then ab belts may be of some use to help you avoid muscle wastage (atrophy) during that time. This may be why Bruce Lee was dabbling in them, or that may be simply because he was curious and loved testing out new fitness and training techniques.

But even then I would question the usefulness of the abs belt because there are other ways you can train your stomach without having to get up from the sofa – for instance by using static contraction. Here you simply push against your knees using your abs as hard as you can and hold for the count of ten and repeat. It’s a similar process to using an ab belt, but it allows you to push much harder thereby causing more microtears and having a bigger impact on your muscle development. But it’s not really restful.

As ever there is no silver bullet in exercise and if there was a way to get strong without putting in any effort – well then we wouldn’t have any fat people.