Beauty is in the eye of the beholder… right? Well according to science, no it isn’t really. While we sometimes comfort ourselves in the fact that people’s tastes vary, countless research has unfortunately shown that there is a general consensus on what is attractive and what isn’t. And to be honest this is something you probably noticed yourself already…

So the question is, what is it that dictates what we think of as beautiful and what we find unattractive? Where did these seemingly arbitrary rules come from, and how can we make our own looks more appealing to the masses? Here we will look at a few answers offered by science. 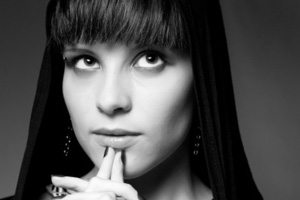 Evolution has played a part in every aspect of humanity from our psychology to our society and has been the driving force behind our development since before we were even human.

This then is also one of the big driving forces behind our beliefs regarding beauty. Whether a person is attractive or not then is largely down to whether they represent a healthy mate who would provide healthy offspring and thus help us to perpetuate our genetic code after we are gone.

One thing we consider to be attractive in a mate then is symmetry, and the reason for this is hypothesized to be because that symmetry represents the ability for our cells to reproduce successfully through mitosis without error, which in turn means you are less likely to suffer diseases such as cancer. Supporting this theory is the fact that celebrities considered to be attractive often have faces that are statistically more symmetrical than the average.

Likewise if a man looks healthy then that means they probably lead a good life, which probably means they are more likely to have good resources and a high status which they are likely to use to help further their children’s health and success. Thus a muscular body is attractive because it suggests the man can protect his offspring AND because it suggests they are healthy and have access to the right food.

For women men are evolutionarily looking for signs of fertility which likewise suggest that they will be able to give birth to a healthy child and look after them. This then means that men will consider a woman more attractive if she has a good hip to waist ratio (‘child bearing hips’), and large breasts. In fact it has been shown that there is a ‘golden ratio’ for hips and waists and that is considered most attractive to men.

It has even been suggested that men are attracted to full and voluptuous lips because they remind them of the vagina on an unconscious level, and buttocks because they look like breasts.

Society and external factors however also influence our cultural views of attractiveness, and these views even change over time. The reason for this is that we can develop associations in our mind between certain images and certain feelings. Throughout our daily lives we are constantly bombarded by images of specimens of physical health in the form of celebrities. These individuals are constantly shown to be attractive and to have ideal lives and lots of success, and so we begin to create the association unconsciously in our minds between that look and success and happiness.

Because celebrities use air brushing to have the perfect hips, and because they have the money to afford expensive dental procedures etc., that then means that we come to believe that those things are the marks of someone who is successful and desirable and so they become attractive to us.

But this then begs the question – where do individual differences come from? Well one reason that our tastes vary is that ‘like attracts like’ when it comes to physical features and that we are far more likely to find someone attractive if they look a lot like us. This is likely because someone who looks like us is likely to be a good genetic match, but also because it enables us to encourage more of our traits to survive in the offspring. It’s also been suggested that we choose our partners partly through scent and this can help us to choose our best genetic match too.

Another reason for our individual differences may be due to our personal experiences and the associations that we develop throughout our lives. A fetish for shoes for instance might be a result of seeing shoes during sexual intercourse, or of being very attracted to someone who also happened to wear very prominent shoes.