Just now out in the garden my ultra-liberal neighbor… ACHOO! … sorry…was going on and on about climate change and about …ACHOO! … how we had to do something about global warming before it began to actually affect us. I told her to…ACHOO! … buzz off because I had to go to the store to buy some antihistamines for my hay fever because I’d run out. Usually I don’t have to take them this late in September, but for some reason this year, I do.

OK, that’s not literally true. I don’t personally suffer from hay fever, although I do have a few ultra-liberal neighbors who are concerned about climate change. And they do go on and on about how global warming will affect us – but someday, not right here and now, in the present. However, I’ve just seen a report about how it’s already affecting many of us who are sensitive to pollen and other plant allergens. 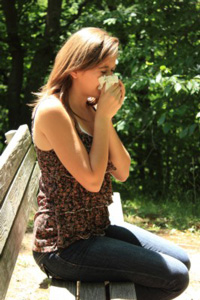 The report in question comes from Britain, and its Health Protection Agency (HPA), which analyzes risks to the public caused by such things as killer heat waves, infectious diseases, and food poisoning. They issued a stern warning to Britons, suggesting that the longer summer caused (ostensibly) by global warming was going to constitute a far greater threat to chronic hay fever sufferers this year than in previous years.

This is not an empty concern, because one in five Britons suffer from hay fever, which can become potentially life threatening if the hay fever victims also suffer from asthma. Professor Roy Kennedy, a contributor to the report, said, “It is not trivial. Hay fever and asthma significantly reduce quality of life and have a significant economic impact on society.”

England is not the only country concerned about this year’s long summer. Reports from Canada, Australia, and the United States echo the same findings. In Canada, the season in which ragweed (a significant cause of hay fever) flowers and spreads it pollen in the air has increased by 27 days. Allergy specialists at the Rutgers Center of Environmental Prediction have issued similar warnings to New Jersey residents because of an alarming increase in ragweed pollen and airborne mold spores. In other words, it’s really a global problem.

How can you protect yourself if you suffer from hay fever?

For the 30% of Americans who are sensitive to plant and mold allergens and thus don’t greet this news of a longer “hay fever season” with joy, the question arises, “What can we do to avoid spending the next six weeks in misery?” The answer is the same in this longer season as it was in previous shorter ones – limit your exposure. Spend more time indoors and less time outdoors, especially during the mornings, when the most pollen is in the air. When you’re outdoors, wear a hat to keep pollen out of your hair (which acts as a kind of magnet to attract it), and wash both your hair and your clothes more often. When you wash your clothes and your bed linen, put them in the dryer rather than hang them outside on a line, where they’ll just pick up more new pollen. And, of course, stock up on the medications (antihistamines, anti-inflammatories, nasal drops, etc.) that you normally use to suppress the symptoms of hay fever. Most important, if you or members of your family suffer from asthma, take note of this longer season and have the proper medications on hand if someone suffers from an attack.

A longer hay fever season is not quite as horrific a result of worldwide climate change as, say, the icecaps melting and the level of the oceans rising so much that they flood our coastal cities. But it is an indication that the impact of global warming – if it is as inevitable as scientists have predicted it to be – will not just affect us at some time in some unspecified future. It’s affecting us today, here and now.