That seems to be the gist of a new study published in the New England Journal of Medicine. The research, led by neurologist Dr. Joe Verghese at Albert Einstein College of Medicine, followed elderly subjects over an impressive 21-year period to determine which activities most improved their sharpness of mind, and thus staved off the debilitating effects of Alzheimer’s disease.

The scientists, working under the assumption that the old saying “Use it or lose it” is extremely accurate when it comes to brain function, studied a number of activities that subjects engaged in to see which ones best improved their cognitive functions. These activities included reading books, doing crossword puzzles, playing cards, writing for pleasure, and playing a musical instrument. They also included physical activities such as swimming, bicycling, playing tennis or golf, walking for exercise, doing housework, and dancing. 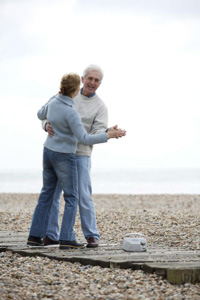 Based on previous research, they expected doing crossword puzzles to score highly, and they did, producing a 47% lower risk of dementia. Reading produced a 35% reduced risk. To the researchers’ surprise, forms of exercise such as playing golf, bicycling, and swimming produced a 0% lower risk of Alzheimer’s – no effect at all. But an even bigger surprise was that regularly engaging in social dancing lowered the seniors’ risk of dementia by a staggering 76%.

Why would dancing have such a profound effect on aging brains?

The theory proposed by Dr. Verghese and his fellow researchers is that social dance is an activity that activates and takes advantage of our brains’ neuroplasticity. That is, according to Dr. Joseph Coyle, a commentator on the study, “The cerebral cortex and hippocampus, which are critical to these activities [greater cognitive reserve and increased complexity of neuronal synapses], are remarkably plastic, and they rewire themselves based upon their use.”

When the aging process causes our brain cells to begin to die off, our memory of nouns (like the names of people we know and love) often go first, because there is only one neural pathway connected to that bit of stored information. If that neural connection is lost, so is access to the piece of information it pointed to. It’s like taking the same well-worn path through a forest, and one day not being able to find the entrance to that path. In patients suffering from dementia, even if they can physically see their destination, they sometimes can’t figure out how to get there, because they’ve forgotten how to find the path they were accustomed to take.

The key to avoiding this, in the researchers’ opinion, is to continually forge new neural pathways. And the way to do this is to constantly challenge the mind and force it to make split-second, rapid-fire decisions. Each of these decisions has the effect of creating greater cognitive reserve and a more complex network of neuronal synapses. In short, the more pathways your brain has to the information stored in it, the more accessible that information becomes, and the less likely you are to forget it.

But again, why dancing?

Dance, especially ballroom dance and other forms that involve cooperation between two partners – one leading and the other following, or both following not just preset steps but having the ability to improvise – causes the very rapid-fire decision-making that forges new neural pathways. The researchers emphasize that not all forms of dancing will accomplish this; for example, types of dance that rely on retracing the same memorized steps will form no new connections in the brain. Improvements to cognitive function occur when we learn something new, something we haven’t done before. The dancers in the recent study who showed the most resistance to dementia practiced what is referred to as freestyle social dancing – foxtrot, waltz, swing, tango, and Latin dance.

In the 21-year study, seniors who danced regularly showed more resistance to dementia than those who only danced occasionally; just as with doing crossword puzzles, more is better. Those who “changed partners” more often benefitted more than those who stuck with the same dance partner, possibly because they had to adjust to the new partner and make more split-second decisions to adapt to their different style.

Interestingly enough, women may benefit slightly more than men from social dancing, because they follow their male partner’s lead, and thus are constantly having to make rapid-fire decisions. But this piece of information can help the men, too. By becoming more attentive to your partner’s style and constantly adjusting your own to insure their comfort and continuity of motion, you can become not only a better dancer, but improve your brain’s cognitive abilities as well.