In recent months, I’ve seen a number of studies that seem to indicate that smoking – as bad as we all know it is for us – may not be the “baddest” thing for us. In another HealthGuidance.org article (What Kills More People Worldwide Than Smoking?) I reported on research indicating that inactivity and living a sedentary lifestyle had now eclipsed smoking as a cause of death worldwide. Now there’s a new study that suggests that alcoholism may pose a greater risk of premature death than smoking, too.

Researchers, publishing their findings in Alcoholism: Clinical & Experimental Research, reported on a study of 4,000 men and women. Because their data was part of a German registry, the epidemiologists were able to track the subjects’ medical histories for a period of 14 years. Among the study subjects, 153 of them were identified as alcohol-dependent. An analysis of their data, compared to the other subjects in the study, revealed three shocking facts.

Women more at risk than men 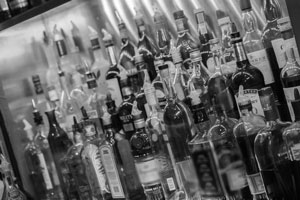 According to Ulrich John, the leader of the study, annualized death rates were 1.9 times higher for males 4.6 times higher for females. Almost more disturbing, the female alcoholics who died had an average age of 60 and the male alcoholics who died had an average age of 58. This is “about 20 years lower than the average age of death among the general population.” Finally, the alcoholic subjects who participated in inpatient treatment for their alcohol dependency did not show lower death rates than those who did take part in treatment.

The researchers’ final analysis was that alcoholism appears to have contributed more to early death than other risk factors, including smoking. Study authors caution that the overall number of alcoholics in the study was small, and thus no direct cause-and-effect relationship can be determined, but the association is still a strong one. Alcoholism is still a chronic and sometimes fatal disease, and this research seems to indicate both that its impact is stronger and more devastating on women, and that treatment for the disease does not necessarily ensure a longer, more normal life expectancy.

Having an occasional drink vs. alcoholism – what’s the difference?

Because so many other diseases and conditions have grabbed headlines in recent years, many may be unaware of the symptoms and behaviors that constitute alcoholism. The following list was synopsized from information provided by the DSM-IV (Diagnostic and Statistical Manual of Mental Disorders, Fourth Edition) and by the Mayo Clinic. They determined that a person may be alcoholic if they display a number of the following characteristics:

• Excessive use. You find that you consume alcohol in larger amounts and over a longer period than you intended. Alcoholics also often attempt to cut down on or control their alcohol consumption, but fail.

• Increased tolerance. Feeling the need for ever-increasing amounts of alcohol before you feel its effects.

• Ritualized drinking. Making a habit or ritual of drinking at certain times and feeling uneasy or disturbed when you can’t drink. Becoming irritable when your “drinking time” approaches, especially if alcohol isn’t available.

• Drinking alone or hiding your drinking. Two of the primary tipoffs of alcoholism are feeling the need to hide how much you drink from others, and the tendency to keep alcohol in unlikely places at home, at work, or in your car.

• Memory lapses. Being unable to remember conversations, commitments, or exactly what you did last night. This is sometimes referred to as having a “black out.”

Moderate alcohol intake (1-2 drinks per day) does not constitute alcoholism. There are even studies that indicate that having a glass of red wine with dinner can actually be beneficial for your heart health. But when one’s consumption of alcohol reaches problematic levels, such as those indicated by the symptoms listed above, it’s probably time to seek help. As the German study cited above indicates, your life may depend on it.