Canadian philosopher-seer Marshall McLuhan once said, “We shape our tools, and thereafter our tools shape us.” He was referring to a process in which humans quickly become so accustomed to the tools they’ve invented to augment their lives that they lose track of how dependent they’ve become on these very tools. Think about electricity. We take it for granted, but what would our lives be like if it suddenly went away? We’d be watching TV and reading email by candlelight.

OK, my last sentence above was a joke, but only partially. Many people are so addicted to “staying connected” via email and Internet-based social media and texting and TV News that you can actually imagine many of them sitting there in a darkened room, waiting anxiously for their screens to flicker into life again. 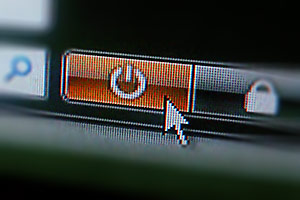 And it’s easy to imagine the primary reason why – habit. In a 2010 study on email usage, 47% of users surveyed admitted that they were hooked on email. 60% read email while on vacation, and 59% check it in the bathroom. Research by the Kaiser Family Foundation indicates that the average American child watches over 7.5 hours of entertainment media (TV, computers, and mobile phones) per day. That’s more hours than most of the kids spend in school.

Many people are looking at the amount of time they and their families spend “plugged in” and deciding to plug the plug, at least for short periods of time. One mother I heard of recently declared a one-week ban on all computerized entertainment after noticing that her family hadn’t really spoken to each other much in weeks. After dinner her 4-year-old would watch “Dora the Explorer” on one computer while her 12-year-old would chat with friends on another computer and her husband retired to another computer to watch movies, all while she’d be washing the dishes while compulsively checking her email. When she “pulled the plug” for a week, her 12-year-old referred to it as “no different than being grounded.” But it worked; they’re talking more now, getting more exercise, and staring at screens less.

This trend to encourage people to “unplug” a little even extends to corporations such as Google. It has instituted policies that basically insist that its employees get up from their desks, stop staring at screens, and do something else for at least an hour of the day. Employees are offered bicycles and hiking trails, fitness classes, and even massage therapists to take advantage of this “unplugged” time.

Do we all need to unplug from time to time?

I think many of us could improve our health and certainly our relationships by stepping away from the computers and the smartphones and the TVs and video games in our lives and reconnecting with either exercise or other real, live human beings, or both. I suspect that following Google’s lead and giving ourselves a one-hour break each day from technology would be a great idea, one that would pay off in improvements to our health and our relationships.

On the health level, numerous studies have revealed that physical inactivity increases your likelihood of contracting conditions such as Type 2 diabetes and cardiovascular disease, and even increases your risk of dying from heart attacks and stroke. The same studies have shown that replacing that inactivity with an hour a day of mild exercise – such as taking a walk or riding a bicycle or working in the garden – greatly improves your health. On the relationship level, if we’re not staring into computer or smartphone or TV screens, we might be more free to gaze into the eyes of our friends, families, and loved ones a bit more, and thus reconnect with them.

So consider taking a vacation from the “tech” in your life from time to time. It’ll be tough, like going on a diet, but like a diet it can pay off in many ways.