What if there was a product that you – as a parent – could buy that could help your kids do better on their schoolwork, get along better with their classmates, be less moody and prone to restlessness, and enhance their ability to concentrate? We all want the best for our children, so if you were told that there was such a product, you’d probably be willing to pay big bucks for it.

Wait…that sounds too good to be true! 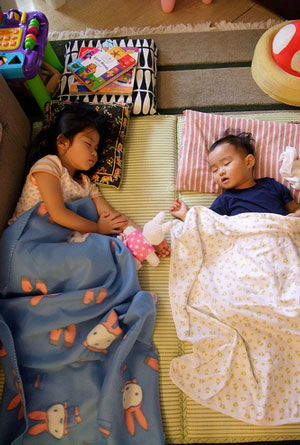 It might, but that’s what the authors of a study recently published in the journal Pediatrics found. Based on the findings of previous studies, they suspected that the behavior of elementary school kids was affected by how much sleep they got, and so with the permission and cooperation of 34 students, they conducted an experiment to prove it.

Before the study began, study leader Reut Gruber asked the students (none of whom had any previous behavioral or academic issues) to sleep the same number of hours per night that they usually did for a week. At the end of that first week of normal bedtimes, the children’s teachers were asked to evaluate their thoughtfulness, their touchiness, and their emotional reactions.

During the following week, Gruber asked the parents of these children to put them to bed either earlier than usual or later than usual. Half of the kids went to bed earlier, resulting in an average of 27 more minutes of sleep per night. The other half of the kids went to sleep later, thus losing an average of 54 minutes of sleep per night. After a week of this schedule, the teachers (who did not know which students were getting less sleep and which were getting more) were asked to evaluate them again.

When the researchers investigated the second set of evaluations and compared them to the first set, they found that the children who got less sleep were rated by their teachers as more irritable, more impulsive, and less able to concentrate on their studies. The sleep-deprived kids lost their tempers more easily, and tended to cry or become frustrated more quickly. On the other hand, the children who got more sleep were rated as being more in control of their emotions, and were more alert in class. Gruber says about the results of her experiment: “Nobody became a genius, and nobody became crazy, but the findings show that in children small changes can make a big difference, and that is why this is meaningful.”

How much sleep is enough?

Naturally, these recommendations are generalized, and vary in individual cases, but parents can use them as a guideline when determining their children’s bedtimes. They can also look for clues in their kids’ behavior; if they are falling asleep in school or in the car or while watching TV, that may be an indication that they’re not getting enough sleep. Another clue can be gained by watching your children’s sleep habits when they are on vacation and thus don’t have any particular schedule to meet. If they tend to sleep longer than they normally do on “school nights,” they probably aren’t getting enough sleep.

Those interested in trying this tip and putting their children to sleep earlier can probably benefit from additional tips offered by Dr. Judith Owens, of the Children’s National Medical Center:

It’s worth a try, and as we mentioned at the start of the article, it doesn’t cost anything. And a little more sleep may pay off tremendously for your children. As Dr. Owens says, “Consider that (sleep) is one of the building blocks of your child’s health, well-being and academic success. It’s equivalent to good nutrition, exercise and all the other things we try to foster and provide for our children. You’ve got to put sleep right up there at the top of the list.”