Why do we shake hands when meeting someone new, or to agree on a business deal or transaction? There have been many theories proposed over the years for why the shaking of hands developed into a widespread ritual in Western countries. For example, many anthropologists have theorized that shaking hands upon first meeting someone was reassuring, because if the other person’s hand was empty enough to shake yours, you knew that it didn’t conceal a weapon. While this theory may be correct, recent research suggests that the real reason we shake hands is because it lights up our nucleus accumbens.

What happens in the brain when you shake hands 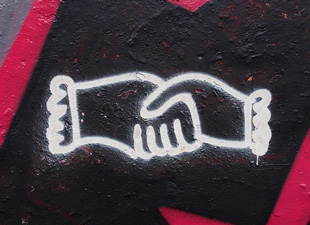 Florin and Sanda Colcos, neuroscientists at the University of Illinois, conducted a study on 18 men and women, using functional magnetic resonance imaging (fMRI) scans to “look inside their brains” as they watched videos of people encountering one another in business or social settings. They used fMRI to measure the blood flow to different areas of their brains, and simultaneously monitored their perspiration levels and galvanic skin response (similar to the way a lie detector does) to see how excited they became.

Their findings, published in the Journal of Creative Neuroscience, indicate that viewing handshakes increased blood flow to or “lit up” a region of the brain called the nucleus accumbens, which is associated with rewards and pleasure. This region also “lights up” and shows increased activity when people anticipate other actions that give them pleasure, such as food, sex, or even an affectionate touch. In other words, seeing other people shake hands gave these subjects the same pleasure and positive feelings they would have gotten from getting a warm handshake themselves.

This scientific validation of the subjective value of shaking hands is potentially important in understanding its development as a near-universal ritual in Western cultures. Whether or not on some primitive but subconscious level our brains might still perceive the handshake as “Whew! That person doesn’t have a weapon in their hand,” the effect of the handshake is still reassuring, pleasurable, and positive. The researchers have theorized that some of the effects they saw in their fMRI scans may be due to the reassuring nature of a non-threatening touch. But whatever the psychological cause, the physiological effect has now been demonstrated as having a real impact on our brains and how they work. We literally feel better after shaking hands, or even after watching others shake hands.

This may help to explain the custom’s wide use in business transactions. In many eras, and still today in some cultures, two people could close a business deal by “shaking hands on it.” A few years ago in the U.S., you could still qualify for a loan “based on a handshake.” The handshake in both cases was considered as binding as a contract. Even though those days may now be past, the value of handshakes clearly is not. It appears that science has finally validated the old dictum that “There is nothing that gives a better first impression than a good, firm handshake.”