Traditional endurance training (like running) does cause weight loss and helps cessation of smoking (Koplan, Powell, Sikes, Shirley, & Campbell, 1982). However, the process of stacking up miles and miles every week increases your chances of suffering from overuse injuries (Hreljac, 2004; Rolf, 1995).

A need to design safer exercise programs which would provide the benefits of endurance training has always been felt. Sports medicine researchers, strength and conditioning coaches as well as fitness professionals have now begun to realise the importance of high intensity interval training (HIIT). 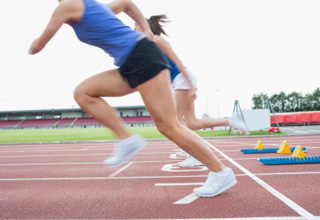 As opposed to endurance training (ET), HIIT not only causes massive improvements in all components of fitness but also does so with minimum of risks, esp. of overuse injuries. What is even more amazing is that although supposedly utilising the anaerobic energy pathway, HIIT has been shown to provide benefits similar to traditional endurance training (more of this later).

Sprint interval training (SIT – a modified HIIT protocol involving short sprints) is a very time-efficient training method, a few minutes of which per day, is sufficient to reach fitness goals.

A sample sprint interval training program for beginners is given at the end of this article.

Physiological Adaptations to ET and SIT

Let us have a closer look at difference in physiological responses to the two distinct modes of training – ET and SIT.

• changes in metabolism of skeletal muscle substrate used for exercise

As opposed to the above changes, SIT (or any other form of HIIT) has minimal effect on the oxidative capacity of muscles and substrate utilization (Gleeson, 2000; Kubukeli, Noakes, & Dennis, 2002). However, SIT causes some very prominent physiological adaptations in the athlete; these are:

• improved performance in events that rely on the aerobic pathway of energy production (read distance running); this is due to better muscle buffering capacity (Edge, Bishop, & Goodman, 2006; Weston et al., 1997)

Furthermore, SIT has been shown to be a very time-efficient method to improve performance in endurance sports (Coyle, 1995). And what’s more, since it involves low volume work, there is not much potential for chronic, overuse injuries.

Although the above comparisons show HIIT and SIT winning hands down, to be fair, there have not been very many research studies to directly compare the results of these two distinct methods of training. One such study conducted in 2012 by Gibala et. al. rules in favour of SIT: exercise capacity, resting muscle glycogen after exercise as well as muscle buffering capacities increased significantly after SIT protocols compared to traditional ET. However, the changes in muscle oxidative capacity were similar.

To conclude, SIT does indeed seem a very time-efficient, safer (owing to the low volume) and more efficient training method – to not only improve fitness parameters but also body composition in the longer run.

After a warm up (jogging or skipping) and stretching (ballistic) session, you should be ready to go. Here’s what a sample SIT program should look like:

• Walk back 20 metres at such a pace that by the time you reach the start line, you should be ready to go – that is, you heart rate should be back to comfortable

• Try to go faster each set

• Build up over weeks

• Increase intensity by going quicker, by increasing distance, and/or the number of sets or reducing rest period

• Remember, do not increase the volume of training (sets) too much – I’d rather go for quality than volume – thus, increasing speed is something I would recommend

• Please note that it is best to do these intervals out in the open; however, you can also do these on a treadmill or even design intervals on the rower or the spinning bike