Dyslexia is a complex learning disability that has been related to hereditary and hormonal influences, and is also sometimes found in adults who have received brain injuries. Dyslexics find it difficult to perceive letters (and sometimes numbers) properly, and as a result have trouble reading, both as children and later in life. Primary dyslexia is usually hereditary, is found more in males than females, and does not change with age, so it may persist into adulthood. Secondary dyslexia (also known as developmental dyslexia), also more prevalent in males, may be more related to hormonal development, and can diminish with age. 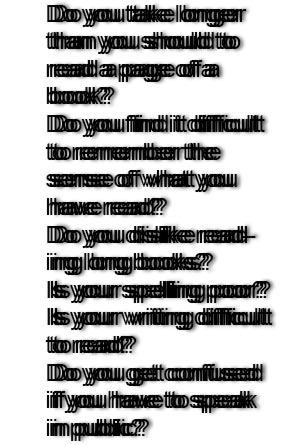 Whatever the causes, the effects are well known – dyslexics have difficulty visualizing letters properly. Their brains may flip the images upside down, tilt them to one side or another, or invert them to form mirror images of the actual letters. If you have dyslexia, you know what I am talking about, and have overcome it sufficiently to be able to read this article. If you do not, and are curious as to what dyslexics see when they look at text, you might want to look at this site from Australia, which contains a demo that helps to illustrate what text looks like to a person with dyslexia: http://www.dyslexiaservices.com.au/

Treatment for dyslexia is difficult, and of necessity involves parents, school teachers, and specialists working with the child or adult, often utilizing a “custom” approach tailored to the specific ways that the individual’s dyslexia presents itself. But a fascinating aid for dyslexics has emerged from an unlikely source – the world of graphic design and computer typography.

Dyslexie – the typeface that makes it easier for dyslexics to read

Frustrated for many years by his own dyslexia, 30-year-old Christian Boer, a graphic designer from the Netherlands, applied his design talents to the problem and has invented a font or typeface that makes it easier for dyslexics to read. He began working on the font in 2008 while studying at the University of Twente, and it evolved into his graduate school project.

In 2010 a fellow student at the university conducted a research study on the font, and found that the number of reading errors made by dyslexics decreased significantly when the text was read in the Dyslexie font, as opposed in the more standard Arial font. The original research was conducted in Dutch, but this discovery could have an even greater impact on readers of English, because English readers have much higher incidences of dyslexia than in other languages such as Italian, in which words are pronounced closer to the way that they are spelled.

How does Dyslexie work?

The brains of dyslexic readers tend to rotate, mirror, or swap letters visually, which makes it difficult for them to comprehend the text they’re attempting to read. Boer himself has said that he tends to see letters as suspended 3-D animations, floating freely in rows of print, and often “floating away” and refusing to remain aligned with the baseline of the text. So he began to experiment with ways to change the letters themselves to make them more “anchored” and less “floaty” and thus less prone to being misperceived by dyslexics.

To accomplish this, he recruited the assistance of fellow students who were dyslexic, and spent enormous amounts of time on each letter to optimize his design. One of the key features of Dyslexie is added weight or boldness at the bases of the letters, so that they appear to be “resting comfortably” there, and dyslexics are less tempted to tilt or rotate them. He also enlarged the openings of letters such as “a” and “c” to make them more different from one another, and gave letters like “j” a slight slant to distinguish it from the letter “i”. Boer also boldfaced capital letters and enlarged punctuation marks to make them stand out more. He says, “I can tell you that I have worked on the comma for four hours and the letter “a” for more than 12 hours.”

Boer’s hard work seems to have paid off, because text printed in Dyslexie really does seem to make it easier for dyslexics to read. He has turned his invention into a series of fonts for common word processing programs like Microsoft Word, common publication formats such as Adobe PDF, and plugins for Web browsers.

The website offers information in English, French, and Dutch about Dislexie, and is displayed in the Dyslexie font, so you can see it for yourself. It also contains a fascinating video that demonstrates the concept behind this innovative font design.