If you’re over 65, you’re probably concerned about memory loss and how to avoid it. Although some memory loss is normal, and not necessarily an indicator of a more serious cause for concern, it is still disconcerting, and few want to experience it. In recent years, because of the growing number of elderly people in the population, and the equally growing numbers of them exhibiting signs of Alzheimer’s, a great deal of research has been conducted to try to pin down potential causes of or risk factors that contribute to the disorder. 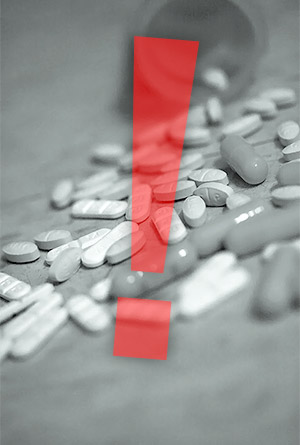 Studies have linked memory loss in the elderly to causes as varied as dehydration (a common condition in the elderly), depression (sadly, increasingly common as well), thyroid problems, and vitamin B12 deficiencies. Unfortunately, new research from Canada indicates that people over 65 who are experiencing increasing memory and concentration problems may need to look in one more location for the source – their medicine cabinets.

Some common medications may affect brain functions in the elderly

Nearly 90% of men and women over 65 – more than any other age group – take at least one prescription medication on a regular basis, to treat insomnia and related sleep disorders, anxiety, allergies, and other problems. Dr. Cara Tannenbaum, an associate professor at the University of Montreal and research chair at the Montreal Geriatric University Institute, has found that 18% of the over-65 patients she treats complain of memory lapses and, when tested, show some signs of mild cognitive impairment. Her findings indicate that some of this may be related to the medications they take.

Her research was recently published in the journal Drugs & Aging, which details her review of over 78 randomized, double-blind trials of adults with no underlying central nervous system disorders who were prescribed common drugs from several drug classes. These drug classes included common benzodiazepine- and non-benzodiazepine sedatives, tricyclic antidepressants, and first-generation antihistamines that were known to affect memory and cognitive abilities. The study focused on drugs that are most likely to affect memory (amnestic) and concentration, attention, and performance (non-non-amnestic) brain functions. The data were carefully screened for quality and for consistency of results across the numerous drug trials.

The findings indicated that the benzodiazepine drugs (used to treat insomnia and anxiety) consistently produced memory and concentration impairments, and that the results were dose-dependent (the more of the drug taken, the more impairment was found). The tests on antihistamines and tricyclic antidepressant drugs consistently produced impairments of attention and information-processing. As a result, Dr. Tannenbaum feels that many of these drugs are contraindicated in the elderly, and should be prescribed and used with care.

She is not alone in this belief. In a report published by the American Geriatric Society, that organization also recommended that sleeping pills, tricyclic antidepressants, and first-generation antihistamines should be “avoided at all costs by seniors.”

How do you find out if you’re taking one or more of these drugs?

Well, the best approach, of course, is to ask your doctor. Neither Dr. Tannenbaum’s research nor this article should be used to go against a trusted doctor’s advice. However, if you are currently prescribed any of drugs in the list below and are concerned about memory loss, this information can and probably should provide a basis for a discussion with your doctor about whether you should be taking them.

These are the drugs in each of the three categories that Dr. Tannenbaum and the American Geriatric Society suggest you should avoid if you are over 65. The first name given is the generic name of the drug; entries in parentheses are common brand names under which the drug is sold.

• Diazepam (Valium, Antenex, and other brands)

• Temazepam (Restoril, Normison, and other brands)