Before my knees went all wonky and I had to go for more low-impact aerobics, I spent some time as a runner. Well, more of a jogger, actually…I never seemed to progress much further than a steady lope, and I certainly never made it to the 10K race or marathon level.

But back when I was running/jogging/loping several days a week, I remember clearly that I always preferred to do it in a local park or while running through a nearby forest. For some reason I could never put my finger on, I always felt more refreshed after running there than I did after, say, running on a treadmill at my gym or on an indoor track. I always wondered why that was. Now I know. It’s because the parks and the forests were green.

The color green boosts the benefits of exercise 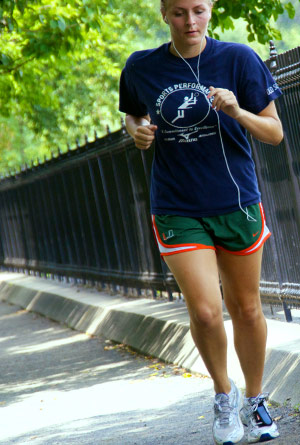 As odd as that headline may sound, those are the findings of a recent study conducted in England and published in the journal Environmental Science and Technology. Researchers from the University of Essex recruited 14 male college students and asked them to ride a stationary bicycle for five minutes while watching videos that simulated riding through natural environments such as parks and forests. Then they assessed the cyclists’ moods and subjective feelings about their “ride.”

After a few minutes, the researchers switched on a filter so that the video was displayed in black and white and had them pedal for an equal amount of time, and then switched the filter so that the scenes were displayed with a predominantly red tint. After each ride, they again assessed the cyclists’ moods.

This study was a follow-up to previous research done by the same scientists, which had established that as little as five minutes of exercise performed in the outdoors produces significant improvements in people’s moods and emotional stability, and in their overall feelings of self-esteem. The study authors theorized that some of the “green effect” they documented was due to the nature of light itself. The colors green and blue are composed of short-wavelength light (450 to 570 nanometers), and demonstrably produce feelings of calmness and serenity. Whereas the colors yellow, orange, and red are longer-frequency (570 to 750 nanometers), and tend to be more stimulating.

Looking for an evolutionary explanation for the phenomenon, the researchers theorized that lush green environments signaled to our ancestors the presence of abundant water and food, and thus were comforting. As a result, humans may have become “hardwired” with a preference for the color green over many generations.

Critics of the study point out that the study was small (only 14 subjects), all of them young men living in England, so the findings may not be universal and apply to everyone. However, the study findings do contribute to a growing body of scientific evidence that suggests that when it comes to exercise and gaining benefits from it, environment matters. In other studies, researchers have found that variables such as where you exercise, what time of day you exercise, whom you exercise with, and even how attractive the people exercising with you are have a profound influence on your moods after exercise, and on your general attitudes about exercise itself.

It’s difficult enough to keep to a regular exercise schedule, so any information that provides insights into how to appreciate it more – both while exercising and afterwards – is valuable. This study certainly provides useful information to me, especially given my subjective feelings in the past about running in nature vs. running in a gymnasium. It’s even more valuable information now that my wonky knees keep me from being much of a runner any more. Next time I need something to inspire me to log some aerobic miles, I’ll hop on my bicycle and head out to a nearby park or forest to ride through. And for general riding around town, maybe I’ll invest in some green-tinted sunglasses.