Have you ever wondered what it is in the brains of creative people that makes them creative? Neuroscientists wonder about these things, and especially about what makes creative artists whose art depends upon the ability to improvise able to improvise.

Clearly, not everyone can improvise. Many musicians, for example, are unable to perform without sheet music in front of them telling them what to play, or without having first memorized all the notes of a composition. Others, such as jazz musicians and freestyle rappers, are able to compose “on the fly,” making up their songs or word poetry in the moment. So what is it in the brains of these improvisational artists that enables them to improvise? 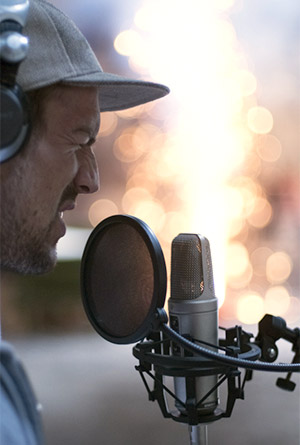 These were the questions driving several neurological studies. In the first, published in 2008 in the journal PLOS One, researchers Allen Braun and Charles Limb took functional magnetic resonance imaging (fMRI) scans of jazz musicians as they were improvising. What they found during the periods of improvisation was that an area of the brain’s frontal lobes called the dorsolateral prefrontal cortex exhibited significantly decreased activity, as if it had been “switched off.” This is the area that controls the so-called “executive functions” of the brain, those involved in planning and supervising other functions. At the same time, the jazz players’ brains showed increased activity in other areas of the brain more involved with thought and in-the-moment action.

Hearing about the jazz study, two Los Angeles rappers named Michael Eagle and Daniel Rizik-Baer contacted Allen Braun and suggested a follow-up study – on them, and 12 of their rapper friends. These professional rappers specialized in a type of music called “freestyle rap,” in which there are no pre-memorized lyrics, and the rappers just spontaneously create the verses they speak “on the fly,” just as the jazz musicians do with the notes they play. Braun and colleagues at the National Institute on Deafness and Other Communication Disorders, and created a study methodology designed to see whether something similar was happening in the rappers’ brains as what they had seen earlier in the jazz musicians’ brains.

It wasn’t the most natural setting for the rappers to perform their art in. Instead of standing on a stage in a club, they had to lie on their backs in an fMRI machine and do their best not to move during the experiments. Beforehand, each of the rappers had been given a set of lyrics to memorize, and at certain points were asked to perform the memorized rap. But then they were asked to switch to “freestyle,” and just improvise lyrics, to the same music track.

And, just as they had seen in the jazz musicians, the researchers saw activity in the dorsolateral prefrontal cortex “switch off,” and activity in the medial prefrontal cortex (which controls action and thought) increase. With the rappers they found that these changes occurred primarily in the left hemispheres of their brains, which is where in right-handed people language is processed. The most improvised portions of the rappers’ performance correlated to the highest activity in the parts of the brain linked with language, action, and emotion.

What do we make of all of this?

The complex interactions that the researchers found indicated to them that much of either the jazz musicians’ or the rappers’ ability to improvise came from having switched off the “executive functions” of their brains. As they stated, “A state of defocused attention enables the generation of novel, unexpected associations that underlie spontaneous creative activity” and facilitates “what has been described as a psychological ‘flow’ state.”

Their findings may help to explain why many artists describe their creative process as if it is “seemingly guided by an outside agency.” The “watcher” or “regulator” functions of their brains have been turned off, so for them it is as if their creations “create themselves.” Rapper Michael Eagle, who performs under the name of Open Mike Eagle, agrees, saying, “That’s kind of the nature of that type of improvisation. Even as people who do it, we’re not 100 percent sure of where we’re getting improvisation from.”

This research is ongoing, with the next subjects including improvisational poets and storytellers. The findings may not help those of us who are less creative become more able to do these things ourselves, but at least we might become better able to understand how they do it.