That sipping carbohydrate drinks during long distance running helps has been known for long. By providing a constant supply of glucose as energy for muscles, the ill effects of prolonged exercise like hypoglycaemia, fatigue, muscle damage, inflammation and even osteoarthritic injuries can be avoided.

Caffeine, by virtue of its stimulant action and BCCA by competing with serotonin (the chemical mostly thought to be responsible for onset of fatigue) seem to prolong the onset of fatigue. 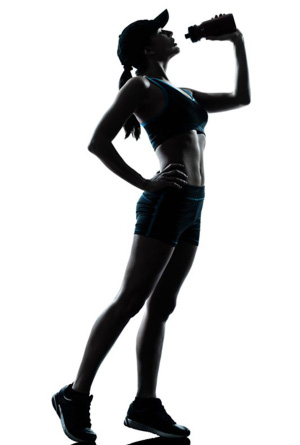 Thus, a sports drink containing these ingredients in optimum proportion may prove beneficial in enhancing performance in runners. In a recently published paper in the Journal of International Society of Sports Nutrition, a group of French scientists set out to investigate if this would indeed be the case (Peltier et al., 2011). And, not surprisingly, they found that a combination of carbohydrates (68.8 g/L), BCAAs (4 g/L) and caffeine (75 mg/L) did improve exercise performance. Moreover, they reported that a sports drink containing such ingredients would mean a sustained glycaemia throughout the duration of the exercise and decreased feeling of fatigue and rate of perceived exertion (RPE).

Effects of individual constituents and how they work in tandem

Let us then have a look at how each of the above suggested ingredients works alone and in tandem to improve performance in runners (Coyle, Coggan, Hemmert, & Ivy, 1986; Jeukendrup, Brouns, Wagenmakers, & Saris, 1997; Tsintzas & Williams, 1998).

For years, research has supported the idea that carbohydrates (CHO) improve performance in exercise lasting for more than 45 minutes. More recent studies, however, suggest that this apparent improvement is largely dependent on the dosage of CHO, duration and intensity of exercise as well as the conditioning of the exerciser (Sullo et al., 1998).

The benefits afforded by a CHO solution are due to the sustained plasma glucose levels throughout the duration of exercise. In addition, when muscle and liver stores of glycogen (internal sources of glucose) run out during the later part of exercise, the supplementation with CHO to keep the glucose supply going comes in real handy (Coyle et al., 1986; Karelis, Smith, Passe, & Peronnet, 2010).

Although different combinations of CHO have been investigated, it goes without saying that a mixture of simple sugars like fructose and glucose – on account of rapid absorption into the blood – are much more effective.

We all know that caffeine alone improves exercise performance and tolerance. When combined with glucose, even small amounts of caffeine (4.5 mg/Kg) can boost performance over and above that possible by using either of these alone (Kovacs, Stegen, & Brouns, 1998). Two mechanisms have been proposed for the beneficial effect of combining caffeine with a CHO – caffeine increase intestinal absorption of glucose and decreases central fatigue. Caffeine induced blockage of adrenergic receptors is responsible for central alleviation of fatigue (Kalmar & Cafarelli, 2004).

Add to that the fact that BCCAs, like caffeine, have been shown to alleviate central fatigue. Although the mechanism differs from caffeine, BCCAs are very much likely as effective in fighting fatigue associated with prolonged exercise as long distance running.

A sports drink containing a mixture of carbohydrates (68.6 g/L), caffeine (75 mg/L) and branched-chain amino acids (4 g/L) and ingested immediately before or during exercise lasting for more than 2 hours is beneficial in improving performance as well as fighting symptoms like fatigue.

To conclude, if you are looking to compete for the marathon next year, a beverage containing glucose, caffeine and BCCAs may be just be the thing you need.