Breast surgery has been around for more than a century. More recently, an increasing number of women have been opting for cosmetic breast surgery, mainly augmentation (to enlarger size) surgery.

According to an estimate, in 2005 in the US alone, a whopping 260,000 women underwent cosmetic breast surgery, more than doubling the amount of surgeries conducted in 1998. In the UK too, breast augmentation surgeries have more than doubled between the years 2002 to 2008. 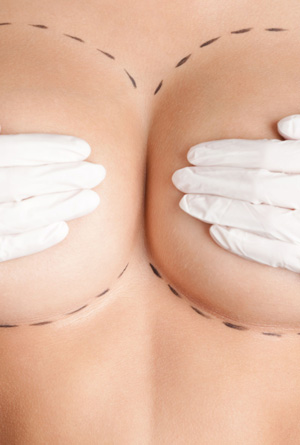 Despite the fact that cosmetic surgery may afford benefits to the woman in the form of confidence in self, or in post-mastectomy (removal of breast to control the spread of breast cancer) women, there are some very real risks/side-effects associated with the procedure.

Some of these are discussed in the following segments.

Breast augmentation surgery involves placing of a silicone gel-filled implant in the intrices of breasts with the aim to enhance size.

• Saline implants – as the name suggests, these are filled with sterile salt water which is either pre-filled or can be filled in at the time of the procedure. Saline implants requires a smaller incision (as compared to silicone implants) – this is usually taken under the crease of the breast or the armpit and thus is very hard to detect.

• Silicone gel-filled implants – are made of a silicone gel and come only in pre-filled variety. Although, these require a much larger incisions, they are much safer than the saline ones – chances of an infection greatly decrease with silicone based implants.

Although a number of different techniques are used for the procedure, surgeons are always looking for improvements to minimize the risk of infections, side-effects and patient discomfort.

Due to an increase in the number of reported cases of connective tissue diseases (CTDs), the US Food and Drug Administration (FDA) in 1992 banned the use of these implants in breast augmentation procedures (allowing their use only for research purposes) (Kessler, 1992).

Subsequent research findings, however, suggested that breast implants were not associated with increased risk of CTDs (Kjoller et al., 2002; Lipworth et al., 2004). Based on the recommendations of these studies, FDA withdrew the ban in 2006.

According to the FDA, there are numerous side-effects or risks associated with cosmetic breast surgery and implants; some of these are:

• Uneven breasts are a very realistic and unwanted side-effect of breast cosmetic surgery; defeats the very purpose of why you would want a surgery in the first place.

• Pain or discomfort either in the nipples, breast, neck or back – with/without thinning or shrinking of the surrounding skin.

• Change in the way your breast or nipple feels – breasts may feel colder than they would normally do.

• Rupture of the silicone gel implants with or without occurrence of symptoms.

• Capsular contraction due to formation of scar tissue around the implants.

• Sever infections like toxic shock syndrome can occur – infection of surgical wounds with microorganisms is the suggested mechanism. Sometimes, the infection may be severe enough to necessitate removal of the implant.

Notwithstanding the above mentioned risks, anecdotal evidence suggests that breast implant surgery seems to be quite safe. Research suggests that there seems to be no correlation between the procedure and increased risk of breast infections.

To conclude, at the present moment in time, if scrupulous surgical procedures are followed and care taken to avoid infections, breast augmentation surgery seems to be a safe enough procedure.