The last time I wrote about the Internet and the effect that it has on us for this website, I used a quote from Canadian visionary Marshall McLuhan. I shall do so again, because it seems appropriate again. He said, in those days before the Internet, speaking about media in general, “We shape our tools, and thereafter our tools shape us.” I think the quote is even more meaningful now that so many of us spend so much of our time on “social media,” chatting with friends that we may have met there, but whom we may never have met in real life.

How many of you reading this article use a particular social media tool called Facebook? Show of hands. Don’t be shy…I admit to being a member, too. So how many “Facebook Friends” do you have? Would it surprise you to learn that the more of them you have, the more stressed you might be? 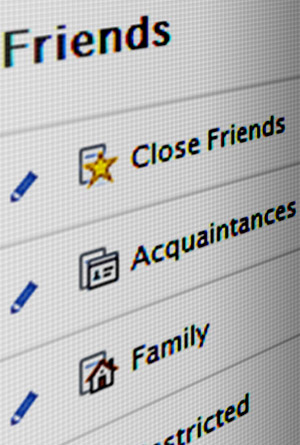 Those are the findings of a report from the University of Edinburgh Business School, co-authored with the University of Bath. It states that “the more social circles a person is linked to online the more likely social media will be a source of stress.”

Why would this be? After all, it flies in the face of the Facebook meme, which is, “The more friends you have, the more popular and successful and well…fantastic you are.” The problem with this idea is probably apparent to anyone who joined Facebook (or other social media outlets) and started with a small circle of “friends” who were, at first, actually close friends. Then your parents discovered Facebook, and asked you to “friend” them, so you added them to the mix. Next you added some acquaintances from work, and they joined your circle of “friends” as well. Now, especially if you’re like 67% of Facebook users and don’t understand its Privacy controls, much or most of what you write is read by all of them.

Basing their study on over 300 surveyed Facebook users, the researchers discovered that 97% of “Facebook Friends” consist of people we know offline, 81% consist of extended family, 80% are siblings, 69% are “friends of friends,” and 65% are colleagues. In addition, many people “friend” their significant others (boyfriends, girlfriends, husbands, wives), and an astounding 64% are “friends” with their exes. 55% of parents follow their children’s activity on Facebook, and 50% of employers say that they have made the decision not to hire someone based on what they found about them on Facebook.

So why is this a problem that would cause stress?

As the researchers point out, “the more groups of people in someone’s Facebook friends, the greater potential to cause offence. In particular, adding employers or parents resulted in the greatest increase in anxiety.” So when you post something that you really wanted to be seen only by your close friends, it is in reality being read by family members and coworkers as well. If you don’t know how to use Facebook’s Privacy controls well, it may be completely public, and being read by anyone, anywhere. What happens if you swear, or post something recklessly that reveals information which should have been kept private, or worse, commit that most grievous of all Internet Sins and “post while drunk and stupid?”

To illustrate the problem, I have created a graphic of my own (not part of the original study) using classic overlapping Venn diagrams: 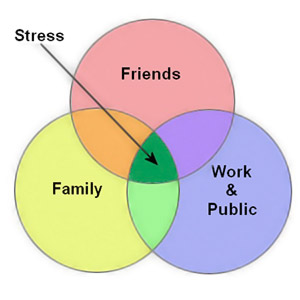 This is where the problem lies. You say something that you meant to be read by only your friends and it’s seen by members of your family. Or you say something that was meant for friends and close family like “I hate my job and I’m looking for another one,” and it’s read by your boss. Let alone what happens when you flirt playfully with your ex and your wife or husband reads it.

As study author Ben Marder says, “Facebook used to be like a great party for all your friends where you can dance, drink and flirt. But now with your Mum, Dad and boss there the party becomes an anxious event full of potential social landmines.”

The ideal of Facebook – one place where you can “be yourself” and reach out to all of the people you are “connected to” with one post – is a nice idea. But in reality we all have overlapping social worlds in which “being yourself” means one thing in one world and means something very different in another world.

So, after some time, and after suffering from a few instances of having said something on Facebook that one or more of your “friends” reacted to badly, instead of the ideal of “being themselves,” people wind up being less themselves, and more cautious. They “tread lightly” and tend to double-think every post they make, so as not to offend one or more of the people in their by-now enormous circle of friends and acquaintances. To paraphrase Marshall McLuhan, “We have shaped our tool, and it has made us paranoid.”

While stopping to think before posting something on Facebook may be a good thing in terms of preserving harmony, it does create stress. So consider all of this the next time so-and-so asks you to “friend” them on Facebook. Do you really want to have to stop and think before pressing the Send button, “Will so-and-so like this, or will it offend them?”