Staying up late working on your computer or watching TV or reading may not just be increasing your electricity bill to power all those devices. The light coming from them may actually be increasing your stress levels and contributing to making you depressed.

That’s what researchers from Johns Hopkins University reported, in a study called SLEEP that is published in the journal Nature. Their study was on mice, but they feel that the findings are relevant to humans because we are similar to mice in many ways, one of them being that we both have cells in our eyes that are light-activated. These cells, more technically referred to as intrinsically photosensitive retinal ganglion cells, react to light and cause changes in areas of our brains that control our memory and our moods.

Working under bright light can affect our moods and our health 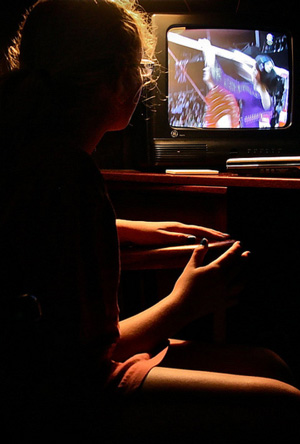 Exposure to bright lights for long periods of time has been shown to increase production of the “stress hormone” cortisol, which has been linked to the development of depression. In addition, previous studies on humans – as well as research on the health problems caused by “shift work,” in which people work late or all night and this disrupt their normal sleep cycles – have indicated that light impacts the brain’s limbic system. Working under bright lights during late-night or all-night shifts has been linked to sleep disorders and lowered serotonin levels, increased obesity, diabetes, breast cancer, and heart attack risk, elevated on-the-job injury rates, and negative metabolic changes. These things all make intuitive sense, because the nature of shift work itself disrupts our natural circadian cycles.

The SLEEP study is interesting because it’s more about the effects of light during these disrupted cycles. In their research, Johns Hopkins scientists exposed mice to alternating cycles of 3.5 hours of bright light, followed by 3.5 hours of darkness. In results consistent with previous studies, the researchers found that the light did not disrupt the mice’s normal sleep cycles. But it did result in behaviors that indicated they had developed the mousey equivalent of depression.

As biology professor Samer Hattar, one of the study’s authors, summed up their findings, “Of course, you can’t ask mice how they feel, but we did see an increase in depression-like behaviors, including a lack of interest in sugar or pleasure seeking, and the study mice moved around far less during some of the tests we did. They also clearly did not learn as quickly or remember tasks as well. They were not as interested in novel objects as were mice on a regular light-darkness cycle schedule.”

It’s not just mice…hamsters are depressed by light at night, too

In a study conducted at Ohio State University and published in Molecular Psychiatry, scientists found similar results in hamsters. In this study, the rodents displayed signs of depression even when exposed to dim light at night. The good news is that in this study, the researchers found that the depression could be reversed by simply returning the hamsters’ environment to a more normal light cycle.

So if you’ve been feeling a little depressed lately, you might consider cutting down on the time you spend each night gazing into bright light sources. Like your computer or iPad, or sitting under your favorite high-intensity reading lamp while finishing up that novel before going to sleep, or just your TV. Heck, even if the bright light emanating from your big-screen television isn’t contributing to feelings of depression, let’s face it…much of the programming you’re watching probably does.