In our fast-paced world, most of us spend more time interfacing with media and technology than we do interfacing with nature. We often feel that we have become dependent on our computers, mobile phones, and our media, and that we need these things to think and act creatively. But a recent study published in the journal PLOS ONE seems to indicate that the best thing we might be able to do for our creativity is to leave all of these high-tech toys at home and just take a walk in the woods.

In the study, called Creativity in the Wild: Improving Creative Reasoning through Immersion in Natural Settings, David L. Strayer and his fellow researchers worked with 30 men and 26 women who were about to participate in a four-day “leadership expedition” sponsored by the group Outward Bound. During the hike they would be deprived of all of the creative toys and tools mentioned in the first paragraph – no phones, no iPads, no computers, no Internet…just nature, and the joy of walking through it.

Creativity before and after exposure to nature 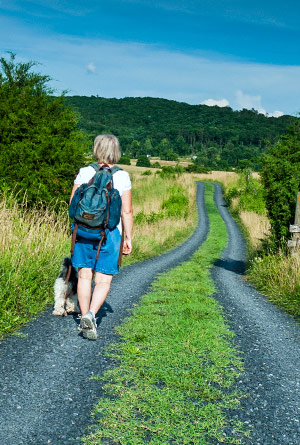 Before the hike began, Strayer gave his volunteers a standardized Remote Associates Test, which is often used to measure creativity, and creative problem-solving abilities. The subjects were asked to associate groups of words with the one word that applies to them all, or links them in some way. For example, given the words “beans,” “golf,” and “envy,” the word that links them is “green.” There were no time limitations on the test, and the goal of each question was to come up with the correct answer on one’s own, by thinking creatively. Four days into the hike, the volunteers were given the test again.

As the study authors suggest, “This study is the first to document systematic changes in higher-level cognitive function associated with immersion in nature. Nature seems to be one of the most effective ways to put one’s mind at ease and enhance creative thinking by setting aside worries.” The researchers suggest that the effect nature seems to have on enhancing creative thinking is due to the lack of distractions in the natural environment – there are no ringing phones, beeping computers, horns honking, etc., so people are able to immerse themselves more deeply in what is going on around them. Other studies have shown that the color green – the color of much of nature – is perceived by the brain as both relaxing and rejuvenating, and that increased relaxation may be one of the factors that enhanced creativity in this study’s participants.

None of this is exactly news. The benefits of nature for the mind have been known for centuries, at least anecdotally. Philosopher-author Henry David Thoreau spoke eloquently about the two years he spent living the rustic life in Walden, written back in 1854. As he said, “I went to the woods because I wished to live deliberately, to front only the essential facts of life, and see if I could not learn what it had to teach, and not, when I came to die, discover that I had not lived.”

The experience certainly seems to jumpstarted his creativity – he went on to write almost 50 books, essays, poems, and other works. Given this recent study, it looks as if his advice in Walden to “Simplify, simplify, simplify” is still good – if you want to relax your mind and allow it to become more creative, take a walk in the woods, and leave your iPhone behind.