Here’s a test for those in the reading audience who are over 50 (or for anyone of any age, if you’re curious). It’s pretty simple – just sit down on the floor, and then stand up again, but without using either your hands or your knees to help you accomplish this. Sounds simple, right? But give it a try.

This is the test that Brazilian researchers gave to over 2,000 men and women over the age of 50 in a study recently published in the European Journal of Cardiovascular Prevention. The study participants were asked to do this, using the actual words, “Without worrying about the speed of movement, try to sit and then to rise from the floor, using the minimum support that you believe is needed.” Each subject was then given a score based on a scale of 10 (five possible points for sitting, and five for standing). Every time they needed to use the support of a hand, knee, or other body part to accomplish either sitting or standing, a point was subtracted. 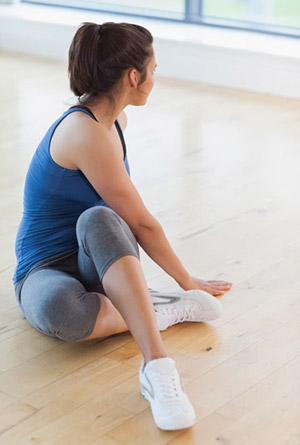 People with the lowest test scores (between 0 and 3) were five to six times more likely to die during the study period than those with the highest test scores (8 to 10). Each point increase in a subject’s test score was found to correlate with a 21% reduction in their risk of dying. This correlation held true even when other risk factors for mortality such as age, gender, and weight were taken into account.

How do the researchers explain this?

As study author Claudio Gil Araújo of Rio de Janeiro’s Gama Filho University puts it, “If a middle-aged or older man or woman can sit on and rise from the floor using just one hand – or even better without the help of a hand – they are not only in the higher quartile of musculoskeletal fitness but their survival prognosis is probably better than that of those unable to do so.”

Higher scores on the test also tend to indicate a better quality of life, because the person is able to perform most of the normal activities of life more easily, such as bending over to pick up a newspaper or something dropped on the floor. As Araújo says, “It is well-known that aerobic fitness is strongly related to survival, but our study also shows that maintaining high levels of body flexibility, muscle strength, power-to-body weight ratio and co-ordination are not only good for performing daily activities but also have a favorable influence on life expectancy.”

These research findings were in accord with a 2010 study that found that poor performance on a standardized test of balance and grip strength was also associated with a higher mortality risk.

Eeek! I scored badly on the test. Does that mean I’m going to die?

Well, probably…eventually…since there are not a lot of people who’ve found an “out” to the problem of mortality. However, if you took this test and didn’t score highly on it, don’t start composing your Last Will And Testament just yet.

As we science writers have to explain often when writing up scientific research, correlation does not imply causation. What these Brazilian researchers found was that there was a strong correlation between those who performed badly on this sitting-standing test in their study and those who died before the completion of the study. What they didn’t go into were the actual causes of death, or whether these deaths might have been related to factors other than the subjects’ physical fitness; they didn’t even provide any information about the state of the subjects’ health before the study started. The subjects themselves also covered a wide range of ages – from 51 to 80 – which is too broad to draw any “cause and effect” conclusions from the data.

All of that said, what this study does is to provide doctors and health care providers with a simple test that can be performed anywhere, by anyone, and that requires no equipment. The test provides a simplistic but reasonably accurate picture of the musculoskeletal health of people over 50, and that picture can be added to other assessments and test data to help their patients live a long, fruitful life. If part of that long life includes admonitions to “Get more exercise, especially the type that increases your flexibility and balance,” well, that is good advice at any age. It’s just that the advice might be more important for those over fifty if they scored in the lowest percentile.