One of the strangest phenomena in the world of modern popular music is the enduring affection many people had for a group that emerged from the San Francisco Bay Area in the late 60s called the Grateful Dead. Fans (and yes, “fans” in the sense of the root word “fanatics,” from which that term is derived) would follow them from concert to concert, calling themselves “Deadheads,” and establishing a kind of migrant culture all their own. I admit to having been one of their number from time to time.

But ask any Deadhead why they did this, and you are likely to get the same answer: “It’s because of those magical moments in which they stopped being seven musicians onstage and seemed to become one, all part of the same One Mind, somehow synchronized such that they appeared to be communicating telepathically, all of them on exactly the same ‘wavelength.'” 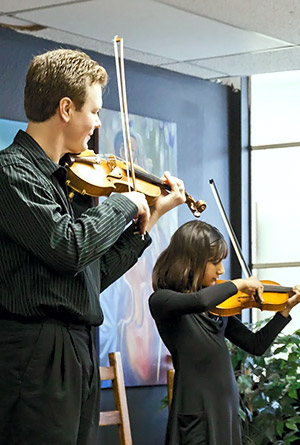 Fans of other forms of collaborative music – whether it is produced by singers joining together in harmony or classical musicians grooving to the same Bach composition, seemingly lost in a kind of One Mind telepathy – have noticed the same thing, and have commented on it. Now a study from the Max Planck Institute for Human Development in Berlin suggests that this perception on the part of the fans isn’t just idealized fan hype – musicians really DO synchronize their brains when they’re playing together.

The brainwave activity of musicians playing together

Johanna Sänger, lead author of the recent study published in the journal Frontiers Of Neuroscience, wanted to follow up on previous experiments in which two guitarists playing a duet seemed to share the same brainwave patterns. So she contacted a group of 32 guitarists, and arranged for them to play the same duet (Christian Gottlieb Scheidler’s Sonata in G Major) in pairs, with each musician hooked up to electrodes attached to their scalps, so that she could monitor their brain activity as they played.

In this study, she asked the pairs of guitarists to alternate parts as they played the composition over and over, one taking the lead in one performance, and the other taking the lead in the next. Her hypothesis was that if the earlier study was correct, then even when playing different parts the brainwaves of the two musicians would synchronize, and demonstrate what she calls “interpersonally coordinated behavior.” This is, in fact, what happened.

As Sänger says, “When people coordinate their own actions, small networks between brain regions are formed. But we also observed similar network properties between the brains of the individual players, especially when mutual coordination is very important; for example at the joint onset of a piece of music.” As the study goes on to state, this kind of synchronization, which the researchers term “phase locking,” takes place when the frontal and central lobes of the brain begin to function similarly in the two musicians. These areas of the brain are linked with long term memory, especially emotional memories, and especially as those memories are used to predict an action’s consequences.

The brain synchrony actually began before the music did

One interesting finding in the study was that as the leader of the duet prepared to play the piece, the other musician’s brain activity began to synchronize with the leader’s brain activity before the music even started. It was as if the very desire to cooperate on the coordinated production of a piece of music was triggering the synchronization, and not necessarily the music.

While the practical applications of this research are yet to be proved, I find it interesting because it not only explains the synchrony that the Grateful Dead managed to achieve onstage, but also the whole “Deadhead” phenomenon itself. The audience followed the band from performance to performance because while listening to the music they got to synchronize their brainwaves to those of the musicians as well, and participate in the One Mind phenomenon.

Either that, or they were just hippies, looking for a good time and some nice music to dance to. That is certainly a possibility, given the sensibilities of the hippie era, but I like the “phase locking” explanation better. It sounds more scientific.