Most of us have seen one or more of the Terminator movies, and so we know what the term “cyborg” means. The word was first coined in 1960 by scientists working on how to make astronauts more efficient in space, and is short for “cybernetic organism,” meaning a human being whose abilities have been augmented or improved using technology. Over fifty years later, we have any number of examples of cyborgs around us, although few of them look like Arnold Schwarzenegger. They’re in the form of metal-and-plastic replacement hip joints for when ours wear out, or cochlear implants to help us hear, or the partially-robotic arms and legs being used by amputees to give them back their missing limbs. 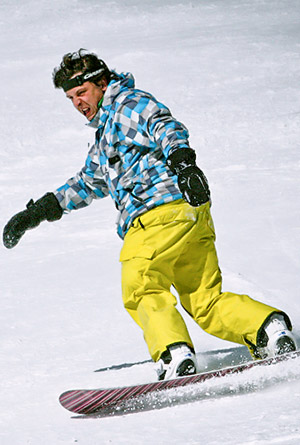 One of the things that makes the replacement hands and feet possible is the use of haptic technology. This is a type of tactile feedback mechanism that provides the illusion of touch to someone who cannot experience it directly. Think about it – no matter how technologically advanced a replacement hand might be, if you use it to pick up a crystal glass, how can you tell whether you’re holding it gently or tightly enough to crush it? You can’t actually feel the glass, after all. Haptic devices simulate that ability to feel. They were first developed to give pilots a better feel for the rudders, flaps, and ailerons of their planes via force feedback, making the controls of the aircraft artificially shake and vibrate to mimic the way that the actual controls were doing.

But what does all of this have to do with learning how to snowboard?

Well, recently an engineer at the Université Paris-Sud in France named Daniel Spelmezan has developed a haptic system to teach people how to ride a snowboard. His work is of interest to rehabilitation specialists, physical therapists, and doctors because it may be of use to them when trying to help people regain their mobility after a stroke or a devastating injury, and may be a vision of their future.

Spelmezan invented a haptic snowboard system that includes sensors mounted in special snowboards and snowboarding suits. These sensors detect the motions of a snowboarder trying to navigate a slope (or learn how to do so). They can detect which direction the athlete is facing on the snowboard, when they change direction, and how they are shifting their bodies and changing their weight distribution to control the board. The system analyzes all of this information and then provides tactile feedback to the snowboarder via a series of vibrating units mounted at the shoulders and thighs.

In theory, this should enable an instructor to provide more direct feedback to a novice snowboarding student. Rather than just telling them in words how to turn, the system can “buzz” the snowboarder’s left shoulder and thigh to “cue” them to shift them as they have been instructed to do. In essence, the haptic feedback system is saying to the novice, “Feel a buzz on your left side? Then turn your body to the left to make the next turn.” The system can also theoretically detect errors in the snowboarders’ riding styles and prompt them to correct them by “buzzing” the appropriate body parts.

So does this work? Should I sign up for cyborg snowboard lessons?

The answer to this question is both Yes and No. Spelmezan found that the system worked better for people who had experienced a few traditional non-robotic lessons first than it did for absolute beginners who had never been on a snowboard before. For the novices, all of the vibration and buzzing proved distracting.

However, for those who had already developed some basic skills and thus were comfortable on the snowboards, the haptic sensors improved their performance much more rapidly than traditional instruction. They very quickly developed the habit of noticing the vibration at shoulder or thigh and translating that into the movements necessary to carve a turn or shift their weight to remain upright during more challenging movements. Spelmezan is also working to simplify the feedback system when it comes to correcting mistakes, limiting the feedback to the moves necessary to correct only the most important mistakes, and providing “buzz” prompts only in those cases.

As for the relationship of this somewhat science-fiction-y form of snowboard instruction to medical science and rehabilitation therapists, doctors are very excited about the possibilities. Haptic feedback mechanisms could be used, they believe, to help people learn to walk again after injuries, and in many other cases. It’s not as if they’re thinking of turning us into cyborgs and providing us with Arnold Schwarzenegger’s “microprocessor-controlled hyper-alloy combat chassis” or anything, just providing us with tactile feedback mechanisms that help us learn faster.

I don’t need rehabilitation therapy at this point in my life, but sign me up for the cyborg tango lessons. When it comes to dancing I’ve always had “two left feet,” and a buzzer on each one would probably help a lot.