One of the challenges of making wiser dietary decisions – for example, choosing a healthy snack like fruit or nuts vs. a snack loaded with sugar, fats, and carbohydrates – is overcoming the forces of marketing that are beamed at us continually. The ads for junk foods we see in magazines and on TV and even on the wrappers or boxes of the foods themselves are often full of attractive men and women looking…uh…sexy. Why? Well, as marketers know so well, sex sells. Numerous marketing and psychological studies have indicated that sexy images tend to make us buy the things they are attached to. 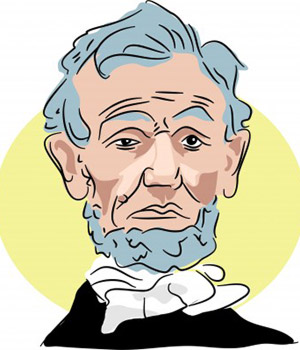 To balance this, a team of market researchers at Northern Kentucky University have conducted a study that indicates that more platonic images – the faces of close friends, family, and trusted (but non-sexy) individuals such as Abe Lincoln – can counteract this trend, and help us to make wiser food choices.

Look at these images, then choose a snack food…

That was pretty much the nature of the study conducted by David Raska and his colleagues. They asked a number of students to participate in several experiments. In the first experiment, the students were asked to choose a snack from menus displayed on a computer screen. But the backgrounds of the menus – an influence so subtle and subliminal that most did not even notice that there were three different variants of the menu – were changeable. One view put the menu choices against a background of hearts; another displayed the same menu on a background of kisses; the third showed the same menu on a blank white background. (Pretests had shown that the images of hearts were subconsciously associated by most people with feelings of platonic or non-sexual love, and kisses were associated with feelings of sexual love.)

The students were then told that they had 75 cents, and asked to choose one of the snack items. Approximately 70% of the students exposed to the subliminal platonic love symbols (hearts) chose a healthy snack, such as a box of raisins or an apple. In comparison, only 49% of the students exposed to the more sexual symbol (kisses) chose a healthy snack. Those who saw the menu against a white background made essentially the same choices as those who saw the kisses. “We were surprised to find no significant difference in snack choice between the kisses and the blank screen, suggesting that a consumer would go with the less healthy choice unless there was some subtle reminder not to,” said Raska.

This result corresponded with the results of previous studies, showing that subliminal exposure to symbols of platonic love evokes feelings of caring and commitment that are more long-term, whereas exposure to symbols of sexual love evokes feelings of romantic love and passion that are more short-term. Their working hypothesis was that exposure to the more platonic images would encourage people to think more “long-term,” and thus make decisions that were healthier for them in the long run. The results of the first experiment confirmed this hypothesis.

Naturally, since all of the subjects were students, it is not a given that these trends would apply to people of different age groups, but the researchers suspect they would. The point that they were trying to make was that food choices are not made in a vacuum, but in an environment that bombards all of us with subtle, subliminal cues – some of them of a platonic or non-sexual nature, and some of them of a very sexual nature. Brent McFerran, not involved with the study but a marketing professor at the same university, says, “The findings of this study add to a growing body of research that suggests our temporal mind-set – whether we are thinking in terms of a long-term or short-term orientation – does affect our food choices.”

Extrapolating from their findings, these marketing specialists suggested that those who are trying to eat a more healthy diet and make wiser food choices may benefit from surrounding themselves with images that remind them more of committed, long-term love than short-term, romantic or sexual love. For example, keep photos of your family and good friends in your office workspaces and on your cell phones, rather than pinups of sexy models. The latter might be more enjoyable to look at, but if the findings of this study are accurate, they might just leave you standing at the vending machine choosing junk food, rather than something better for you.