If you had been asked ten years ago to write a description of yourself ten years hence (meaning now), how accurate do you think it would have been? Do you think that you would have been able to anticipate the changes you might go through, what those changes might do to your beliefs, your tastes, your core values, and your basic personality?

The “end of history” illusion 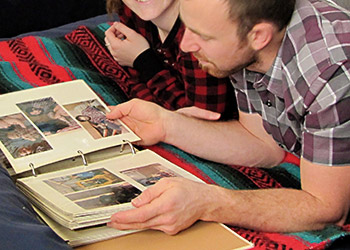 In a study published in the journal Science, Harvard psychologist and researcher Daniel Gilbert found that although most people admit to having changed over the last ten years, they somehow believe that (and often insist that) the person they will be ten years from now will essentially be the same person are now. As Gilbert says, “It’s not that we don’t realize change happens, because we all admit at every age that a lot of change has happened to us in the last 10 years. All of us seem to have this sense that development is a process that has delivered us to this point and now we’re done.”

He and his colleagues call this mistaken belief the “end of history” illusion. No matter what their present age is, most people tend to act as if past history has shaped them but then somehow stopped shaping them, leaving them in their final, unchanging form, one that will not change in the future.

Gilbert’s findings came as the result of a long study in which over 19,000 people were asked to complete preference, personality, and value surveys from two points of view – themselves as they were in the present moment, and then themselves as they envisioned they’d be ten years from now. The researchers then compared the “future” descriptions to how people actually turned out in ten years, and found an interesting trend: “When a 40-year-old looks backward, they say, ‘I’ve changed a lot in terms of my personality, in terms of my values, in terms of my preferences.’ But when 30-year-olds look forward, they say, ‘I don’t expect to change a lot on any of those dimensions.'”

To make sure that their findings were not the result of people possibly romanticizing and overemphasizing past change while underemphasizing the potential for future change, Gilbert and his colleagues compared their data to a previous study in which people were asked to fill out personality questionnaires in 1995-1996 and then again in 2004-2005. They found the same discrepancy – the subjects were actually pretty good at evaluating how much they changed in the past, but terrible at evaluating how much they’d change in the future.

The researchers have two theories as to why this “end of history” illusion happens. The first is that people seem to have an innate desire to believe that they “know themselves” in the present moment, and that the future is to some extent predictable. This leads them to believe that their basic personality is permanent. The second theory is that it’s simply much more difficult to imagine the future than it is to remember the past. Because people have a hard time figuring out what they might be like in the future, they avoid the issue and prefer to believe that they won’t change at all.

These findings naturally have consequences in the real world. People commit to jobs or to relationships based on how they feel now, assuming that they’ll feel the same way in ten years. All that one has to do to see the folly of this belief is to look at the frequency with which Americans now change jobs, or even professions, or at divorce statistics in the U.S.

Based on his study’s findings, Gilbert feels that many people’s decisions would turn out better if people realized when making them that they might change in the future, and to some extent gave themselves an “opt out” clause. On the other hand, some of Gilbert’s other research indicates that this probably wouldn’t be that great an approach, because people who feel that they have the ability to change their minds later aren’t as happy about the choices they’ve made as people who make an irrevocable decision.

So the bottom line may be that we’re stuck with this tendency to underestimate how much we might change in the future. Ten years from now we’ll look back on what we imagined about our futures and realize how wrong we were. But hopefully at that point we’ll look ahead to the next ten years, realize that we have no clue as to how we’ll turn out at the end of them, and forgive our former selves for being as clueless then as we are now.