Did you know that the oft-spoken ‘metabolic rate’ is, in fact, a measure of the rate of secretion, blood levels and action of certain hormones?

These hormones, as you may well have guessed, are immensely influenced by your lifestyle (whether active or sedentary – level of physical activity, the kind of exercises you are into – endurance or anaerobic training) and the kind of food you eat (nutrient uptake).

Depending on the positive or negative influences, these hormones, over a period of time, will have a positive or negative influence on tissue adaptation and thus health and fitness of the individual. This theory finds application in exercise based disease prevention, achievement of fitness. Specific training protocols for improving performance in athletes are also based upon this principle. 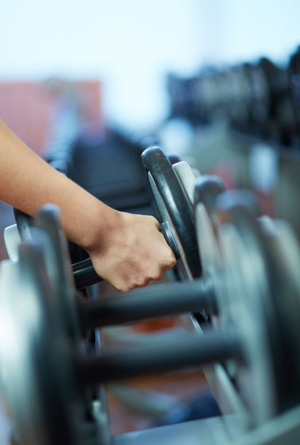 Let us have a closer look at how the kind of exercise you do influences the secretion of hormones.

Hormones secreted in response to exercise

Both aerobic and anaerobic exercises stimulate the release of hormones from a variety of endocrinal tissues – pituitary, testes and adrenal gland, to name a few. Aerobic exercise (like a long run or power walk), is more often associated with increased levels of cortisol than anaerobic resistance training. Cortisol in catabolic in nature, meaning it causes tissue breakdown and contributes to the so called ‘chronic fatigue syndrome’.

As we all know, endurance athletes are rarely associated with muscle hypertrophy (increased size of muscles). The most often reason attributed is that you burn too many calories during training and there is very little left to build muscle. However, the fact remains that although testosterone is secreted during endurance activity as well, it is not on par with that associated with anaerobic resistance training. Moreover, most of the testosterone secreted in utilized mainly to fight the immense tissue damage that occurs due to longer stress on slow muscle fiber and release of cortisol. Also, the ratio of testosterone to cortisol shifts in favour of cortisol during high volume endurance training.

On the other hand, anaerobic resistance training like Olympic weightlifting or high intensity interval training (HIIT) shifts the balance in favour of the catecholamine hormones like epinephrine (adrenaline) and norepinephrine (noradrenaline). In addition, the hormones characteristically associated with ‘doing weights’ are testosterone, human growth hormone (hGH), insulin like growth factor (IGF) and insulin. All of these are anabolic hormones. Furthermore, resistance training is associated with a significant increase in the testosterone to cortisol ratio (Gorostiaga, Izquierdo, Iturralde, Ruesta, & Ibanez, 1999). Numerous studies have found that insulin plays a crucial role in the interplay between these hormones (Hansen, Landstad, Gundersen, Torjesen, & Svebak, 2012; Slentz et al., 2011).

In contrast to aerobic training, anaerobic resistance training is associated with a short-term, higher intensity stress to fast-twitch muscle fibres. The associated higher levels of ‘anabolic’ hormones like testosterone, hGH, IGF and insulin means that you are building tissue more than just repairing it. Laying down of new protein for repairing and increased formation of contractile parts of muscle are some of the contributing factors of these anaerobic hormones.

Factors that have been associated with increased level of these anabolic hormones are:

Thus, CrossFit type of workouts – since these are associated with compound exercises, higher poundage, higher reps and almost no rest at all – are more likely to be associated with increased secretion of the lean muscle building hormones that stress hormones (cortisol). And, thus the associated benefits of these training routines. Sprint interval training and high intensity interval training (HIIT) are likewise very effective in releasing the anabolic hormones.

In retrospect, although all forms of exercise have pluses and minuses, endurance activity especially when associated with a high volume of training can place undue stresses on the body. Thus, it can be safely said that if not training for endurance events, resistance training coupled with low-volume endurance training or high intensity interval training seem to be better options for improving fitness or for losing weight.