Bikram yoga, also known as ‘hot’ yoga, is a type of yoga created by yoga guru Bikram Choudhury by taking and adapting aspects of Hatha yoga and adding the ‘hot’ element to the mix.

In essence Bikram yoga is yoga but performed in a hot, sauna-like environment of 105 Fahrenheit or more with the idea being that it will help with circulation, increase intensity and aid flexibility. While the concept was introduced in the 70s, it is currently enjoying something of a resurgence and getting a lot of attention in the media, so the question is: does it really work? 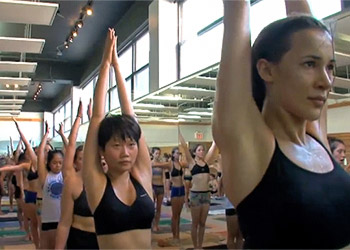 The practice of Bikram yoga normally follows a very strict and precise routine of 26 postures and 2 breathing exercises that should last for exactly 90 minutes. These exercises alone should provide the practitioner with all the benefits of any yoga session which are many – increased muscle control, toning, flexibility and stress relief. But does doing it in extreme heat really help any?

From a scientific standpoint there is little reason to suspect that performing yoga in a hot room would have any benefits for you. When you work out in the heat you will increase your metabolism slightly and this may help to burn more calories but the difference will be very slight. As a low intensity workout, yoga is not highly suited for burning calories and you’d be much better off going for a run.

The idea that you can stretch better when your muscles are warmed up is also technically correct, but there’s a problem: that being that your body will become very dehydrated in these scenarios making cramps much more likely. That’s the last thing you want during a yoga session…

The real misunderstanding for most people though is regarding sweat. Despite popular belief sweat will not ‘detox’ your body (most of your toxins are broken down by your liver and kidneys and leave the body via your urine, not your pores) and it won’t help you lose weight either. You’ll weigh less after a session of Bikram yoga, but that’s only because you’re dehydrated and the weight will go straight back on as soon as you have a few glasses of water. Sweating can help to combat acne and improve skin by removing surface-level dirt, but conversely it can also actually worsen skin problems as the sweat remains around the face.

If you read around the web you will find a large number of claims from Bikram purists that emphasise how this form of yoga can go above and beyond conventional yoga and ‘cure’ conditions as wide ranging (and ludicrous) as scar tissue and lupus. The idea that scar tissue would be at all affected by a series of stretches clearly has no scientific basis and shouldn’t be taken at all seriously.

Something many staunch defenders of the practice will point out though is that Bikram yoga is about more than just the heat and is unique due to the ‘tourniquet’ nature of the 26 positions which are aimed at ‘directing’ blood toward certain organs. Apart from the fact that you can’t direct blood by using postures (other than relying on the effect of gravity which would send it mostly to your extremities rather than your organs), the 26 positions used are quite similar to those used in Hatha – which was never designed to be performed this way.

What’s more concerning is the fact that Bikram yoga may not be entirely safe, and there is a lot of controversy around the subject. Risks include hyperthermia (overheating) and dehydration, which dizziness, fainting and heat stroke being common symptoms. Those with high blood pressure or on medication should also be careful when using yoga, while forcing ‘hypermobility’ on the joints during stretching may cause instability.

That’s not to say that Bikram yoga is deadly, or that it isn’t worth a go. However you should be sceptical of the claims that many practitioners teachers make with regards to its benefits, and you should be very certain to take a lot of water and to stop if you notice any signs of dizziness or discomfort.