If you belong to a gym then you will probably have noticed what a vast range of different torture devices they have on display. Most of these you’re probably familiar with – such as the classic treadmill or the bench press – but some of them are likely completely alien to you. We look at these with curiosity, but in many cases we never pluck up the courage to give them a go for fear of looking stupid, injuring ourselves, or just discovering they’re a big waste of time.

In some cases we’re better off steering clear (Vibropads are nonsense) but a lot of the time it’s a big shame and we end up missing out on great new workouts that could do a world of good for our routines. 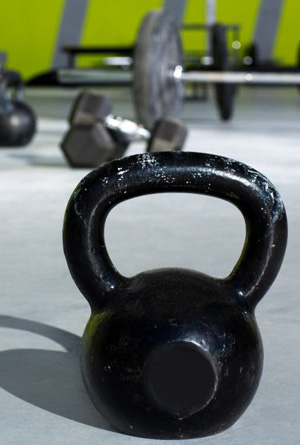 Among these hidden gems of the gym are the kettlebells – iron ‘bell’ shaped weights that you can often find standing on the floor next to the dumbbells. Here we’ll look at what they are, how you can use them, and why they’re so useful.

Essentially kettlebells are an alternative form of dumbbells. They serve the same purpose by providing a weight to be used in one hand, but the handle is different – taking the form of a loop that’s heavy itself and that’s linked to a big iron ball. This forces you to hold them slightly differently but ultimately they are used in generally the same way you might use a dumbbell (though they generally don’t go up quite as high).

So if they’re basically weirdly shaped dumbbells… what’s the point? Well the real idea behind the kettlebell is that it forces you to lift slightly differently and that it engages a different range (and greater range) of muscles in your arm. Because the weight is distributed differently you will be forced to balance the weight with the supporting muscles in your forearms and core, and because the handles are bigger and easier to grip onto you can do a range of more explosive movements you wouldn’t be able to pull off safely with the dumbbell – you’ll see people swinging them around and even ‘throwing and catching them’.

A good example of the utility of kettlebells is to think about how you would curl one compared to a dumbbell. With a dumbbell you hold the bar which is at the same level as the weights themselves. This means that once you get to a certain height, the force on your bicep isn’t quite as great – it’s going down through your forearm meaning you’re essentially ‘propping’ it up rather than pulling it any more.

On the other hand when you curl with kettlebells, you will hold the weight by the handle and you’ll have the main weighted part (the ‘ball’) still hanging from the handle so that it’s pulling down against you and you have to use your bicep to keep it up. This means you actually train the biceps in a greater ‘range of motion’ when you curl resulting in a fuller appearing muscle and more functional strength.

The kettlebells are also commonly used for a range of compound movements. This means exercises where you use lots of muscles in the body at once. The slightly off-centre nature of the kettlebells means that they’re great for targeting the smaller stabilizing muscles including those in your core and your forearms. Furthermore, using kettlebells you’ll be able to switch between different movements more easily.

For instance, if you start with the kettlebells on the floor in front of you, you can squat down to pick them up with your legs (making sure not to involve your back) then curl them up to your chest before switching grip, and then pressing them over your head. This is something you can do much more quickly and easily than you could with the dumbbells, and that will target more muscle groups as a result of the shape of the kettlebells. In particular this will work your hamstrings, quadriceps, calves, forearms, biceps, shoulders, triceps, abs, obliques, lats, traps and more.

If you’re looking to tone fat and to build up endurance, then another great way to use kettlebells is by swinging them. For instance, to work the front deltoids (shoulders) you can practice swinging the kettlebell up in front of you and back down. If you fancy a challenge you can even try letting the kettlebell hang in the air for a moment before swapping to the other hand and repeating the movement on the other side. The momentum here we will help you to keep going for a long period of time which makes it ideal for burning fat. Better yet though, your body will be forced to stabilize against forces working on you from all directions meaning you’ll be using all the stabilizing muscles in your body to stand straight and meaning that you’ll create more positive hormones as well such as growth hormone and testosterone. When you get really good you can even start swinging the kettlebells around your body and over your head – just be careful not to take anyone’s head off with them…