D-Aspartic Acid or DAA has been making waves in the fitness world; it has taken the supplements industry by storm. Marketed as an effective and safe ‘testosterone booster’, DAA does indeed seem to increase testosterone levels in your body; almost as much as by 40% over baseline.

For those worried about the ‘side-effects’ profile drugs that promise to increase your anabolic hormones, there is more good news. DAA utilizes your body’s very own internal mechanisms to raise testosterone – therefore, there is no feedback inhibition involved – thus, no shrinking of the testes or ‘gynaecomastia’ (development of female like breasts). There are very few side-effects (esp. like the ones that you’d get if you were to inject yourself with anabolic steroids). 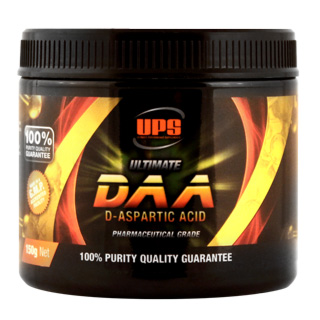 So, what is DAA? And, how does it bump up your ‘man’ hormone. Let us familiarize ourselves with the compound and its mechanism of action.

DAA plays a significant role in the sexual functioning of an individual including the synthesis and release of sex hormone, chiefly testosterone.

No wonder then that it is specifically concentrated in endocrinal glands that have a significant influence on sexual functions in the males – testes, pituitary and pineal gland (D’Aniello, 2007). Animal studies have conclusively proved the role played by DAA in stimulating release of Testosterone (T) from the testes, Luteinising Hormone (LH) and Growth Hormone (GH) (D’Aniello et al., 2000). Luteinizing hormone is a pituitary hormone that controls testosterone production by a feedback mechanism.

An interesting observation – that low DAA levels in males are related to low sperm count and sperm motility – proves the important connection between sex hormones and DAA (D’Aniello, Ronsini, Guida, Spinelli, & D’Aniello, 2005). Similarly in females, reduced concentration of DAA is related to a lower quality of oocytes (ova or eggs) and decreased chances of fertilization (D’Aniello et al., 2007). Both of the above may be related partly to the low levels of LH due to low levels of DAA.

Presence of DDA in endocrinal glands, role in synthesis and release of sexual hormones and DAA deficiency causing asthenic sperms and oocytes, is ground enough to believe that DDA does play a more than significant role in sexual functioning of humans.

DAA Causes Release of LH and T in Humans

In an Italian study conducted in 2009, participants were made to ingest an oral dose of DAA for 12 consecutive days (Topo, Soricelli, D’Aniello, Ronsini, & D’Aniello, 2009). By the end of day 12, LH levels were found to have increased by a third in almost 87% of the individuals. Similar results were observed when testosterone levels were measured – as much as 40% rise over baseline values after 12 day treatment with oral DAA.

In both cases (of raised levels of LH and T), the results were statistically significant – thus suggesting a definite role of DDA in causing elevation of LH and T in humans.

Testosterone levels remained elevated for 3 days after cessation of DAA (after 12 days). This may be due to the fact that DAA has the ability to accumulate in the pituitary and the testes and cause continued synthesis of testosterone even after exogenous administration of DAA is stopped (Topo et al., 2009).

Side Effects of DAA

Although DAA offers a promising new method of increasing your testosterone levels safely, side-effects have been reported by some individuals. These are mostly psychological – depression is the commonest finding. However, others – not surprisingly – have reported an increase in libido, improved strength and muscle gains.

Since DAA acts through an excitatory receptor called the NMDA receptor (N-methyl d-aspartate receptor), over-dosing with DAA can exhaust this receptor and cause graver side-effects.

Some have suggested that DAA may be ineffective in men with normal blood levels of testosterone and may be more beneficial in hypogonadal men (men with low T levels). Thus, although anecdotal evidence suggests DAA does cause raised levels of testosterone; further research is needed to see if that really is the case.