KFC is a fast food chain that has been around for a long time now and is very much one of the ‘big three’ when it comes to your options for where to get a burger and fries. At the same time though, KFC manages to distinguish itself from the other two by focussing predominantly on chicken (KFC standing for ‘Kentucky Fried Chicken’ as everyone should know) and using a special recipe for coating chicken that a lot of people, myself included, find pretty irresistible.

This focus on chicken also makes KFC slightly healthier than Burger King or McDonalds too (though it’s still smothered in greasy fat and doused with liberal doses of salt), which is why it’s managed to avoid some of the ‘Supersize Me’ flack that the other two have been tarred by. Unfortunately for the house of chicken however, a new rumour has emerged that’s tarnished their name instead: the claim that they have begun using mutated chickens. But is it just a vicious lie, or is there any truth to this sci-fi horror story? 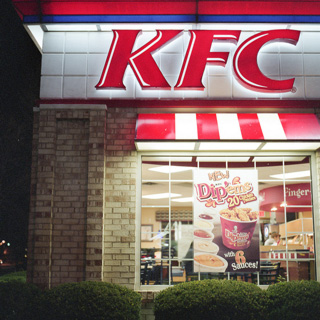 The claim goes that KFC had to change their name from Kentucky Fried Chicken to KFC because they had started using chickens that are so genetically modified as to be no longer classifiable as ‘chicken’. The specifics of this rumour vary but generally the description involves featherless and beakless chickens, pumped with steroids to provide maximum meat through minimum work.

Here’s an example of the viral text that has most recently been doing the rounds:

KFC has been part of our American traditions for many years. Many people, day in and day out, eat at KFC religiously. Do they really know what they are eating?

During a recent study of KFC done at the University of New Hampshire, they found some very upsetting facts. First of all, has anybody noticed that just recently the company has changed their name? Kentucky Fried Chicken has become KFC. Does anybody know why? We thought the real reason was because of the ‘FRIED’ food issue. It’s not. The reason why they call it KFC is because they can not use the word chicken anymore. Why? KFC does not use real chickens. They actually use genetically manipulated organisms.

These so called ‘chickens’ are kept alive by tubes inserted into their bodies to pump blood and nutrients throughout their structure. They have no beaks, no feathers, and no feet. Their bone structure is dramatically shrunk to get more meat out of them. This is great for KFC because they do not have to pay so much for their production costs. There is no more plucking of the feathers or the removal of the beaks and feet.

The government has told them to change all of their menus so they do not say chicken anywhere. If you look closely you will notice this. Listen to their commercials, I guarantee you will not see or hear the word chicken. I find this matter to be very disturbing. I hope people will start to realize this and let other people know.

Please forward this message to as many people as you can. Together we make KFC start using real chicken again.

The rumour started as a joke around 1999, that later developed into viral e-mails and internet memes. ‘Boycott KFC’ images can now be found all around Facebook and other social media sites and it seems that a lot of people actually believe the rather ridiculous rumour (which the company’s PR department understandably finds rather alarming).

Those with a bit more common sense however should be able to see through this hoax relatively easily. Grammar aside, a quick inspection will reveal that KFC’s advertising repeatedly uses the word ‘chicken’ as do their menus. Furthermore, it’s most likely that the government would tell them to do more than just remove the word ‘chicken’ from their name – chances are the entire operation would be shut down. In fact anyone who has had a chicken leg from KFC should be able to see fairly easily that the bones are normal size. The real reason that KFC changed their name was simply to move away slightly from ‘chicken’ to emphasise the range of other foods on the menu.

Oh and that student didn’t really find a brain in his KFC either (though a spokesperson admitted it was possible that a chicken kidney could have gotten in… ). More than anything this example shows us how untrusting we are of large corporations and how readily we will believe any kind of conspiracy. That said, the recent horse meat scandal shows us that sometimes these things do happen and mutated chickens or not, KFC still isn’t exactly healthy. Hey, it sure does taste good though – sometimes you’ve just got to say ‘c’est la vie’!