Driving miles and miles of highway can cause a mesmerizing effect on the brain, leading to fatigue. While there’s always been concern about motorists driving under the influence of alcohol and drugs, drowsiness alone can be a killer. One in three of all fatal road crashes is attributed to driver fatigue, according to research by the National Highway Traffic Safety Administration.

Alarmingly, it’s a common occurrence that one in 25 people may report actually having fallen asleep behind the wheel each month, says the US Center for Disease Control and Prevention (CDC), who have been carrying out recent surveys and experimental trials amongst drivers. Their concluding report states: “Drowsiness slows reaction time, makes drivers less attentive and impairs decision-making skills.” 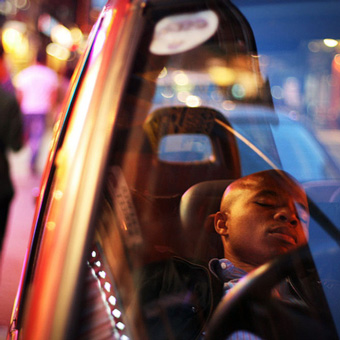 The CDC analyzed responses from more than 147,000 adults who participated in a Behavioral Risk Factor Surveillance System phone survey across 19 states and the District of Columbia. It was in Texas, which has over 3,200 miles of interstate highways, that the survey team found the highest rate of severely tired drivers. Here, 6.1 percent of respondents said they had dozed off at the wheel, while Oregon had the lowest in this category, 2.5 percent.

Lack of proper sleep, perhaps not surprisingly, was the main cause of wheel dozing. Those who reported six or fewer hours of slumber and who for the most part were snorers were the most susceptible and being deprived of a good night’s rest was definitely seen as an indicator of sleep apnea. There were also distinct age differences. Older drivers, 65 and over, were the least likely to report having fallen asleep whilst driving (only 1.7 percent had), but those in the 25 to 34 and 35 to 44 age brackets were the most likely (6.3 percent and 5.5 percent, respectively). The drivers in these younger, higher-risk groups were identified as working long shifts or had been on marathon commutes.

You should be honest with yourself. Has it happened to you and, if so, why? The fact is many drivers just nod off for just a second, often not realizing they’ve done so. It’s a worrying fact that one in four drivers behind the wheel much of the day and night admit to being whacked in any given month, according to a recent poll by the National Sleep Foundation.

Those in this high-risk group include car and truck drivers, people with sleep disorders who are not being properly treated, those on sedatives, drivers who just don’t get enough sleep generally, and people who work long or night shifts.

Shift workers, due to the nature of their job, frequently suffer from sleep deprivation, according to the CDC – so too those working in dangerous industries which require them to be totally alert all the time, thereby cause stress leading to fatigue. Their study found that nearly 70 percent of those who worked overnight shifts in the transport or warehouse sectors often got fewer than six hours of shuteye.

The majority of tiredness-related driving accidents happen in the afternoon and at night. It really is a case of being sensible about your driving regime. If you have a long and potentially exhausting journey ahead, plan out some pit-stops. If you’re feeling tired, pull over into a truck-stop or designated stop area and take a good nap. Better still, book into a motel and get some proper bed rest.

We’ve all tried those common tricks to stay awake while driving, like turning up the radio, opening the window full blast, or ramping up the air conditioner. None of them are really effective, say the CDC, but it does see great hope in today’s new car technology – which can sense the drowsy driver and alert him to the problem.

Remember, there is no substitute for a good night’s sleep – about 8 hours – before going on a long journey and if you are on medication, check to make sure you should be driving at all. Never consider drugs to help you stay awake. It’s good to have a companion. Passengers can help look for early warning signs of fatigue in the driver or even take over behind the when needed and if they’re able. Passengers should stay awake to talk to the driver. Safe driving!