While most often associated with pregnancy, food cravings can strike anyone. Whether you have a sweet tooth, hunger after carbs, or just can’t give in to your craving for salt, food cravings can often cause us to overeat or make bad food choices. So what causes food cravings, and how can we stop them? 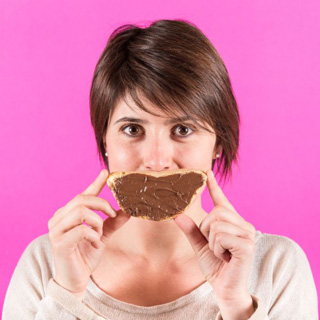 Food cravings are very common during pregnancy, and while most of the time it is a consequence of increased and fluctuating hormones, giving in to food cravings can satisfy a real nutritional need – it’s been said that cravings are your body’s (or perhaps your baby’s?) way of letting you know what nutrients you are deficient in. Some women crave salty foods like chips, suggesting a lack of sodium in the diet; others eat raw lemons which may indicate a need for vitamin C. Some pregnant women find themselves craving non-food items like chalk, ice or coal! This is a condition known as ‘pica’ and has been linked to iron deficiency, even though – bizarrely – neither chalk nor coal have significant amounts of iron in them!

In men, and women who aren’t pregnant, cravings for foods can be strongly emotionally linked. When stressed, depressed or tired, many people find themselves craving ‘comfort foods’ – usually treat foods like chocolate, candies, or pastries. This may be because we associate these foods with pleasure and ‘being naughty’, and so rather than craving the actual food, we crave the way those foods make us feel. Chocolate and high-carb foods, in particular, have been linked to the release of dopamine, a chemical in the brain that triggers pleasant emotions.

How to cope with food cravings

Giving into the occasional craving for candy won’t do you any harm, after all, “a little of what you fancy does you good”! However, if uncontrolled, food cravings can turn into food addictions, and these in turn can lead to faddy eating or overeating – neither of which are good for your health.

Since food cravings are most often emotional, there are three things that you can do:

If you have the will power, just don’t give into your craving. Food cravings are usually temporary, so by not giving in to the craving, you may find that it eventually passes. Distracting yourself and keeping busy will also help you to not obsess over your craving.

Decide if you are genuinely hungry or not. If you are, eat something, but choose a food that is low calorie rather than succumbing to candies or pies. The very act of satisfying your hunger will more than likely make that craving for unhealthy food disappear.

3) Release those feel-good hormones another way

As mentioned above, often when we are stressed or depressed, we crave certain foods because of the way they make us feel. So, why not try releasing those hormones another way? Exercise is a great way to get the endorphins pumping – and it helps you burn calories rather than putting them on!