Iodine is an element that is needed in very tiny amounts in the diet, but without it, it can cause some serious complications. Iodine is used in the body to make two hormones – thyroxine and triiodothyronine, together called the thyronine hormones – which are secreted from the thyroid gland and together help to regulate metabolism. Too little iodine in the diet causes decreased production of these thyronine hormones, which in turn upsets the balance of the body’s metabolism. 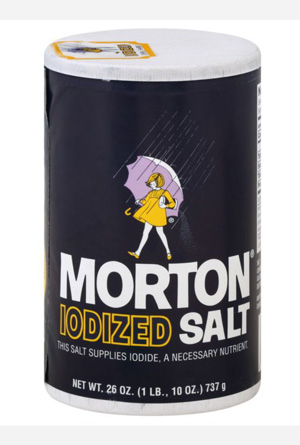 One of the most obvious symptoms of iodine deficiency is goiter. This is a condition that manifests as a large swelling in the throat. When the thyroid gland detects that there are low levels of thyronine hormones circulating in the blood, it triggers the release of another hormone called thyroid stimulating hormone (TSH). This causes the thyroid gland to try and make extra thyronine hormones, and in its efforts to do so, it gets much bigger and swells the throat. Sometimes the effect can be very pronounced indeed, and if the swelling gets too large, it can create difficulties for the patient in swallowing and breathing.

Weight gain can be another symptom of iodine deficiency. Since the thyronine hormones regulate metabolism, not having enough of them – due to not having enough iodine to make them – can cause the body’s metabolism to slow down. In practice, this means that people with iodine deficiency do not burn as many calories from their food as they should do, and so gain more fat. In healthy people, the chemical reactions that cause the body to burn calories also release heat, which helps us to maintain a constant body temperature. Therefore, another byproduct of having an iodine deficiency is that sufferers feel the cold much more than healthy people.

Iodine in the diet

Iodine deficiency is a rare problem in the developed world since foods that are rich in iodine, such as cheese, eggs, milk, saltwater fish, shellfish, and soy sauce, are readily available. People who choose to follow a vegan diet are more at risk, although iodine is often added to table salt to supplement our intake, and iodine supplements can be bought in supermarkets and health food stores. Iodine deficiency is more of a problem in developing parts of the world where good quality dairy produce and seafood may not be available.

It is particularly important to be aware of iodine deficiency when pregnant. Women who have an iodine deficiency during pregnancy are far more likely to experience miscarriages and stillbirths. Of those pregnancies that do result in a live birth, there is more likely to be complications during labor, or premature birth, and children are born with a range of brain development problems ranging from mild learning difficulties to severe mental retardation, as well as problems with speech, hearing and growth. It is for this reason that all pregnant women, regardless of whether they consume enough iodine in the diet or not, are recommended to take iodine supplements or multivitamins containing at least 150 mg per day.