Hookah pipes, also known as hitboo pipes, shisha pipes and water pipes, are large instruments used for vaporizing and smoking a range of flavoured tobaccos (which are also known as shisha). Originally coming from Persia and India in the 15th century, hookah has long been popular throughout the Middle East and South Asia in countries including Egypt, India, Pakistan, Persia, Saudi Arabia, Syria and others. 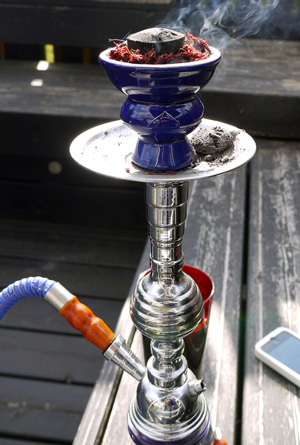 Recently though, these pipes have become popular in a number of Western cultures as a ‘healthy’ way to enjoy smoking with added cultural appeal.

The belief is that shisha doesn’t contain tar or many of the other toxins found in cigarettes, and so it must be safe to smoke in large quantities with no fear of repercussions. But is this accurate?

Unfortunately, despite these popular assumptions, hookah is actually pretty bad for you. In fact, it’s really bad for you and is probably actually worse than smoking cigarettes. A recent review published in Respiratory Medicine found that the impact of hookah is roughly that of 100 cigarettes. Oh dear.

Partly this misconception comes from the belief that tobacco itself is harmless – and that it’s the tar and nicotine that provide problems. Actually, tobacco on its own is also very bad for you and can significantly increase your chances of developing cancer (mouth cancer is common for those who use chewing tobacco).

Others believe that the tobacco in hookah is ‘filtered’ by the water content, but again this is false information. Smoking hookah doesn’t feel as bad because the temperature is generally lower and because the substance has a higher humidity. But actually the smoke itself is just as bad in terms of tobacco and potentially worse.

Furthermore, there actually is a lot of other nasty stuff that goes into shisha, just the same as cigarettes. Shisha smoke contains higher levels of lead, arsenic and nickel. More shockingly, it also contains 36 times the tar and 15 times more carbon monoxide. Oh dear oh dear…

In a study that tested the urine of shisha smokers, researchers found chemicals that could damage the nervous system, the throat, the eyes, the red blood cells and nose – in some cases these were twice as high in shisha users as in cigarette smokers.

And to make matters even worse, a statistics published by the World Health Organisation have shown that on average a shisha session will last between 20-80 minutes and as you might have guessed, this results in a lot more smoke inhaled. While smoking an average cigarette will cause you to inhale 50-100mL of smoke on average, smoking a hookah can lead to 90,000mL of smoke inhaled total (which is how it can cause as much damage as 100 cigarettes).

But what about nicotine? At least hookah isn’t addictive right?

Well no actually, that’s not right. Nicotine is actually just as high in hookah as it is in cigarettes so you can just as easily become addicted. Another problem is that smoking hookah can actually lead to smoking cigarettes with many young people going from hookah – thinking it to be safe and healthy – to cigarettes.

It’s true that most people tend not to smoke shisha as regularly as cigarettes as it simply isn’t as practical when you’re out and about or as readily available, but if you’ve taken to smoking in ‘shisha bars’ then this could quite easily lead to an addiction or to the use of cigarettes and other forms of smoking.

Over the long term, smoking from a water pipe holds most of the same risks as smoking cigarettes including cancer of the mouth, lungs and oesophagus, but can also lead to stunted lung production and smoking while pregnant can lead to lighter babies at birth (and likely other problems).

What About Non-Tobacco Products?

As you may have heard though, there are also ‘non-tobacco’ products available that can be smoked through a shisha pipe which you might be mistaken for thinking would be healthier.

In reality, these will still cause lung problems due to the smoke itself and the carbon monoxide.

So in short, despite what everyone has been saying, hookah is actually really bad for you and actually worse than cigarettes. This is pretty much unequivocal and even smoking other products through a water pipe can cause problems. Smoking is smoking, and if you want to look after your lungs and avoid cancer then you shouldn’t do it. Full stop.

Really the only question that remains then, is why so many people thought it was safe in the first place? How did that happen?