The thought of bedbugs is an unpleasant one, which is probably why parents have used the concept for years now to scare children just before going to sleep (a lot of parents it seems are at least mildly sadistic…). But it’s not just children who should be afraid of bedbugs; it’s an idea that most adults probably aren’t too keen on either and they’re certainly not the bedfellows most of us would choose.

Worse, they’re not exactly great for our health either. Read on and we’ll look at what bedbugs really are, how they actually affect health, and what you can do to get rid of them. 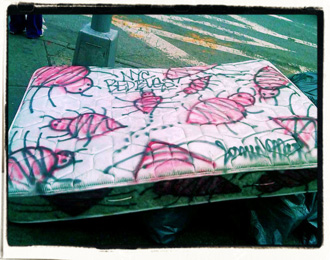 Here’s a nasty fact about bedbugs: females can lay two to five eggs every day and will tend to lay around 500 during their lifetime. That’s a lot of new bugs in your bed and a good explanation for why they can be so hard to get rid of. Furthermore, bedbugs can sustain themselves without really needing to eat. They eat irregularly and can go long stretches without eating anything at all.

The good news is that adults only tend to live around 6-8 months. And another advantage to us is that these critters are at least flightless – if you see something flying into your bed, don’t worry, it’s not a bedbug!

Colours vary among bedbugs, but they tend to be white, tan, brown or orange – like cockroaches. White bedbugs are white because they have recently shed their skin, while some will have dark red spots on their body having sucked your blood. They’re pretty tiny things, but still big enough to see crawling around on your skin at around 5mm long. Eggs meanwhile look like tiny white specks that stick to surfaces and are rather tricky to find. You may also notice brown ‘shells’ discarded on your mattress where they have shed their skin, or black spots where they have left faeces.

The most common bedbugs are ‘Cimex Lectularius’ and are found in mostly tropical areas like Florida and California – though you may encounter them pretty much anywhere. Leptocimex Boueti meanwhile are common in West Africa and South America and actually prefer bats as their hosts of choice.

Fortunately bedbugs are not known for spreading disease in the way that mosquitos do. Nevertheless, they do like sucking blood which can leave behind nasty, itchy welts. You’ll most often find these on your upper body, your arms, your shoulders and your neck (though they will sometimes choose ankles too). In some cases these bites can lead to a reaction causing you to swell up. This will also often cause burning and blisters. Itching bites can sometimes lead to an infection which will require a trip to your doctor for treatment.

Getting Rid of Bedbugs

Bedbugs are not attracted to dirt so bedbugs do not necessarily indicate an unclean bed or bedroom. Rather they are attracted by your body heat and carbon dioxide, which is really outside of your control. Catching the problem early is really your only preventative measure.

If you do spot signs of bedbugs you will probably want to get rid of them, which is unfortunately quite a difficult task. The best course of action is to contact the local council or alternatively a pest control company. In some cases councils will treat your home for bedbugs for free.

If you want, there are also a number of things you can do yourself to try and remove the bedbugs first. Wash all linen at 60 degrees or put them in a hot dryer for thirty minutes to kill any bugs living on them. Likewise you may want to dismantle your bed and inspect the seams using a vacuum cleaner to remove any you see. You can also get insecticide sprays that can be used to deter any stragglers. Some insecticides are designed specifically to be used against bedbugs, but be careful not to spray them directly onto your mattresses. In the worst cases you may have to dispose of your mattress.

Remember that a single bedbug is capable of laying up to 500 eggs if you miss them. That’s why it’s usually advisable to use a professional service rather than to try and go it alone.