Hay fever might be pretty frustrating but at least it’s kind of normal so you don’t feel too victimised by it. Misery loves company and you can be sure you won’t be the only one with streaming eyes around spring. 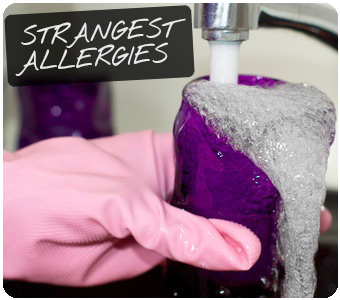 But while hay fever is fairly common, there are many other lesser-known allergies that affect people in a myriad of unpleasant and unusual ways. Read on and we’ll look at some of the very most unusual and upsetting…

The worst allergies are when the allergens are things that are hard to avoid. That surely must make a water allergy one of the very most unpleasant then as it becomes a problem every time you stand under a shower, get rained on or spill some of your drink. One in every 23,000,000 people suffer with this condition which causes itchy and uncomfortable hives whenever water comes in contact with their skin. In some cases this problem can be internal as well, which is why some unlucky people are forced to survive on soft drinks and other beverages.

Conversely some people are actually so sensitive to all food and drink that water is the only thing that they can put into their system. This is an allergy so rare (fortunately!) that there isn’t yet a scientific term for it but it has been observed in a number of young children who experience terrible stomach pain whenever they consume anything. Normally they require food to be pumped directly into their system to avoid starvation.

An exercise allergy may sound like nothing but an excuse for people who are overweight and out of shape, but actually this is a very real condition that isn’t quite as handy as it may at first sound. The technical term for this one is ‘exercise-induced anaphylaxis’ and it again starts with hives but can be potentially lethal if you ignore the initial symptoms. There’s a theory that you can actually cause this allergy by having an allergic reaction to something else and then hitting the gym while reacting to it. So don’t do that!

Again this one might sound like an excuse but this is another very real allergy. Semen allergies affect somewhere between twenty and forty thousand Americans which is actually a fair number. It can cause burning, swelling, itching, hives and shortness of breath. Generally this is a problem affecting women with the symptoms showing around the vagina but in rare cases men can actually be allergic to their own produce. Now that’s a fine example of the ‘pleasure/pain’ principle if ever there was one!

This is an allergy that’s close to my heart. Why? Because I actually suffer with it myself – though only to a mild extent. The condition causes rashes and difficulty breathing whenever sufferers go outside in cold weather, go swimming in cold water, or otherwise generally do anything else that makes them chilly. Even drinking cold water can cause it for some people. For me it’s just a case of hives every time I go out in the cold or swim in cold water but it still ain’t pretty.

On the other end of the spectrum is a particularly tragic allergy to the sun. This is more common than you might think and many people will develop rashes, bumps and blisters due to sun exposure. In severe cases things get much worse and people actually have to remain in doors for fear of fatal repercussions.