When most of us are looking for some more protein in our diets, we normally turn to animal sources such as beef, pork or poultry. In some cases we may try eggs or beans when we aren’t feeling like a big cooked meal but it doesn’t really get much more adventurous than that. 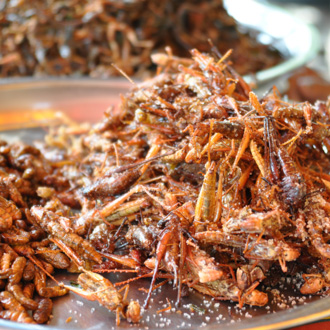 But just because these are the ‘conventional’ sources of protein, that’s not to say that they are necessarily the best. There is another source of protein out there that actually has a number of advantages when it comes to availability, price, amino acid profile and ecological sustainability. What is this mystery protein? That would be bugs. Seems Timon and Pumbaa knew what they were doing…

Is the idea of eating creepy crawlies already creeping you out though? Well then read on to discover just why the concept is gaining popularity and why insect protein is starting to make its way into our food.

An Introduction to Entomophagy

Entomophagy is the technical term for eating bugs, and there are many great reasons to get stuck in.

A popular option for instance is the humble cricket. If you were to eat 100 grams of crickets you would still only have consumed 121 calories, only 49.5 of which would come from fat. At the same time though you would get 12.9 grams of protein and 75.8 milligrams of iron with only 5 grams of carbohydrates.

In comparison, 100 grams of chicken contains 25 grams of protein which is a little more, but it also contains 219 calories which is twice as many and 13 grams of fat. For someone trying to build lean muscle, crickets are starting to look like a very promising prospect.

And crickets are just one of the many options available to us once we can leap this mental hurdle. Another option for instance is the caterpillar which actually contains 26 grams of protein per 100 grams – which is even more than chicken. They also contain a lot of iron, thiamine and niacin (vitamins B1 and B3) and are once again low in all the fattening stuff.

Grasshoppers meanwhile are actually already a popular snack in Mexico where they’re seasoned with garlic, salt and lime. 100 grams will get you 14 grams of protein and only 2.2 grams of carbohydrates. A single grasshopper is worth 16 percent of your RDA of iron.

While crickets might sound disgusting, they are actually closely related to lobsters and some people say they taste similar. You won’t see the cricket when they’re in your protein bars anyway, and eating a dead pig wouldn’t exactly be appetising either: it’s just a matter of changing your thinking and dropping your preconceptions.

As mentioned, grasshoppers are already popular in Mexico, and likewise insects are consumed around the world in a variety of other cultures. In our hunter-gatherer days we would have eaten them, and really there’s no reason to think of them any differently than other sources of protein.

The Future of Entomophagy

Eating insects isn’t only beneficial for its nutritional advantages – it might also help us to cure world hunger and fight global warming.

Think about it: compared with livestock, insects require barely any space, no water and very little sustenance. They produce hardly any methane when compared with cows (which are on-par with cars) and they can be easily and cheaply transported (and so sent over to developing countries).

For these reasons, insect protein is now finally beginning to gain the interest and attention it deserves. The startup company ‘Exo’ is currently developing a protein bar based on cricket flour for instance having raised enough funds through a Kickstarter project. And you can actually already buy a number of different insect-based snacks on the site Chapul.com which was featured a while back on Shark Tank.

There are countless good reasons for us to be eating insect protein and very few reasons for us not to be. It’s not a matter of if it’s going to become a staple of our diets then but when. The question is: how soon can we get over the idea of insects-as-food and wake up to the reality of it?