CrossFit is the ‘new kid on the block’ when it comes to fitness and is currently enjoying a huge amount of success and attention. Much like the new kid at school, when that kid just happens to be highly popular. Bodybuilders and runners meanwhile are left feeling like old news. ‘Video killed the radio star’ and all that…

Unfortunately however, not all of this attention has been positive and CrossFit has come under a lot of fire for being unsafe and causing injuries. So the question is: is CrossFit still a useful training method or should you steer clear? Are the warnings against it justified, or are they just the result of jealousy on the part of the older and more established training cultures? 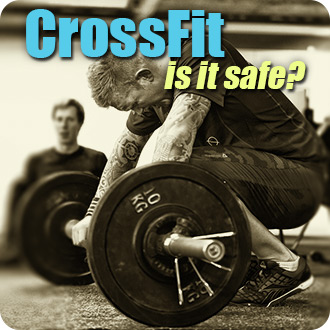 Created by a guy called Greg Glassman, CrossFit is a type of training that emphasises ‘cross-modality’. In other words, CrossFit workouts focus on a range of different types of training to try and create well-rounded athletes and to support all types of health.

Bodybuilding conversely is focussed purely on building muscle strength and size. This leaves out things like flexibility, endurance, running speed etc. and in extreme cases bodybuilders will lose the ability to perform relatively simple movements such as lying down flat. Meanwhile, long-distance runners have great endurance, but often end up with very little muscle mass or strength and stick-thin looking arms. CrossFit incorporates long distance running and bodybuilding techniques into its training routines, along with powerlifting, running, stretching, hand balancing… you name it.

So What’s the Problem?

In theory this is actually good news, and should result in a much more balanced and adaptive physique than specialising too much in any one discipline. If nothing else, it’s getting a lot of people off the couch and into gyms… so what’s the problem?

Well one issue is that CrossFit is also well-known for encouraging very high-intensity workouts. These tend to involve performing circuits of exercises in a very short time frame. These also tend to include large repetitions of powerlifting moves like clean-and-snatches which is another point of contention.

Usually powerlifting moves are performed with heavy weights and low repetitions. In CrossFit they are performed with lighter weights and repetitions often numbering into the 20s and above. Sometimes this will be after running a mile or performing lots of press ups. The issue with this is that it means people will often be fatigued when they’re performing the movements, which results in poorer technique and ultimately potentially back injuries. What makes this worse, is that these kinds of routines are recommended for relative beginners as well as seasoned pros making accidents all but inevitable.

There are other issues surrounding CrossFit too, and one of the biggest is the lack of regulation within the brand. To open up a CrossFit gym (called a Box), all you need to do is to complete a weekend-long course with no written exam. From there, you are then supposedly able to teach complex powerlifting moves as well as every other aspect of fitness. CrossFit boxes vary in quality, but in the worst case scenarios you’re being taught to do high repetitions of a dangerous and complex move by someone who only has two days’ worth of training behind them. Again – accidents will happen.

It’s not just the individual boxes that are responsible though. Every day ‘Crossfit HQ’ puts out a workout called ‘Workout of the Day’ which can include anything from running a mile to doing a circuit of deadlifts and chin ups. While these are unique challenges, it’s insinuated that participants of all levels should be doing the exact same workouts, and often the routines are seemingly random and unplanned. It’s not uncommon to get two shoulder intensive workouts on consecutive days for example.

Unfortunately, CrossFit often doesn’t help itself. Rather than admitting that there are improvements that need to be made, CrossFitters will often react by shooting down any criticisms and in some cases even celebrating the dangerous nature of their sport.

The focus on high-intensity workouts means that it’s not uncommon for people to be sick during CrossFit workouts. This is treated like a ‘badge of honour’ with those being sick being given a ‘I met Pukey the Clown’ t-shirt to celebrate their dedication. In reality, no workout should be so intense as to make you sick, and apart from anything else it’s a waste of good protein.

‘Pukey’ is only one of CrossFit’s distasteful mascots. The other is ‘Rabdo’. Rabdo the clown is a character who represents the serious condition known as rabdomyalsysis. This occurs when you work out so much that the breakdown of muscle tissue actually poisons your blood leading to kidney damage. This is a serious and potentially lethal condition, but CrossFit seems happy to embrace its image to show off just how ‘hardcore’ their style of training is. And then they get defensive when people criticise them for being unsafe…

As Greg Glassman put it:

“It can kill you… I’ve always been completely honest about that. If you find the notion of falling off the rings and breaking your neck so foreign to you, then we don’t want you in our ranks.”

So does this mean you shouldn’t go near CrossFit? Not quite… As mentioned, not every CrossFit box is guilty of encouraging these unsafe techniques, and actually in a lot of cases CrossFit can be adapted to gentler and more beginner-friendly workouts that do develop health well.

And even the intense version of CrossFit has a lot of merit when practiced in a suitable way. Assuming you don’t injure your lower back for instance, the focus on compound movements can actually be very good for building strength in the posterior chain leading to a good defence against injury as well as general performance in these Olympic lifts. CrossFit workouts are also very intensive which makes them challenging and fun. That, and they allow you to get in and out of the gym in no time at all which is very handy if you’re in a hurry or if you don’t fancy starting training.

Hybrid training in this manner is a very good approach for building a well-rounded body. And training with high intensity resistance work also happens to be a highly effective method for burning fat and toning muscle. This is called ‘resistance cardio’ and it might just be one of the best tools for getting a defined physique.

CrossFit should be applauded for getting more people in the gym definitely, and it can also be credited with bringing a lot of very effective training tools into vogue. CrossFit introduced a lot of people to kettlebells, to hand balancing, to gymnastics rings, to battle ropes and to a range of other useful training tools. It also made the tabata protocol popular, and HIIT to an extent – both of which are highly effective for burning fat. It has created a lot of conversations as well (like this one) and the value of that should never be underestimated.

So the point is: don’t throw the baby out with the bathwater.

But that wasn’t the question we started out with. The question is: is it safe? Can you do it without worrying about breaking your back or ruining your knee?

CrossFit can be dangerous, but this is a problem caused by the way it is taught in certain ‘boxes’ as well as the general ‘one size fits all’ approach of the governing body. Like many such things, CrossFit has some very die-hard and evangelical fans who refuse to concede that there are any negatives. This is ultimately destructive for the sport, but you needn’t be one of them.

If you want to try CrossFit for yourself, look around for a good box and discuss your concerns with the coach. If they sound sensible then give them a try. If you aren’t convinced that you’re safe in their hands, then just ignore the ‘WODs’ on the CrossFit website and try your own blend of high-intensity resistance work and cross-modal training. You can do crossfit without having to do ‘CrossFit’.

There are a lot of useful things to be taken from CrossFit, you just have to use your own judgement to identify what those are and to adapt the training methods in a manner that works for your goals and keeps you safe in the process.