Rhabdomyolysis is a condition caused by the breakdown of muscle tissue and subsequent release of muscle fibre into the blood. In high enough quantities this can lead to kidney damage and failure and is potentially dangerous. 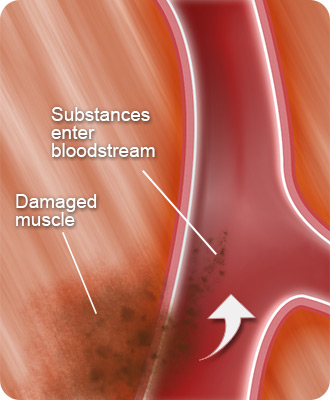 Rhabdomyolysis is generally associated with traumas such as car crashes but it can also be caused by certain lengthy surgical procedures, some recreational drugs, low phosphate levels, extreme body temperatures, genetic muscle wasting diseases and severe dehydration. In very rare circumstances it can also be caused by extreme physical exertion, such as taking part in ultramarathons and even CrossFit training.

The symptoms of rhabdomyolysis include dark red coloured urine, decreased urination and muscle weakness and aching. It may also cause general fatigue, joint pain, seizure and weight gain.

If you notice any of the above symptoms, then you should see your GP immediately (blood in the urine should always be followed by a trip to the doctor). They will often prescribe medications which include diuretics and bicarbonate and they should also treat hyperkalemia and low blood calcium. If the patient shows signs of kidney failure then this will require immediate treatment and might include dialysis.

The prognosis for recovery will depend on the amount of kidney damage, which often depend on how early the symptoms were identified. Those with mild cases should be able to resume normal activity within a few weeks to a month. Complications can include acute tubular necrosis, renal failure, harmful blood chemical imbalances and shock.

When engaging in highly strenuous activity it is crucial to consume plenty of fluids which will help to dilute the urine and flush away myoglobin. Most important though is to avoid engaging in any physical activity that is too far advanced compared to your previous experience. If you intend to compete in an ultramarathon, or are starting CrossFit, then make sure you build a solid foundation in strength and endurance training beforehand to protect against the breakdown of muscle.