Being new to the gym is no fun. Make no mistake, this is a scary place when you’re just starting out and especially if you’re at all self-conscious. You’ll practically be able to feel the eyes of all the seasoned pros on you and when you don’t know what you’re doing this is hardly reassuring. Add the fact that the weights themselves are pretty scary looking and you have an intimidating situation all round. 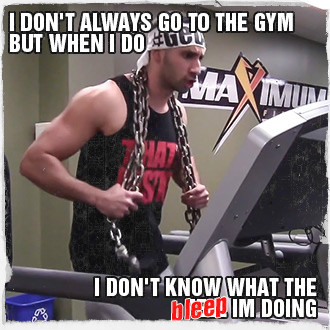 But assuming you manage to overcome this initial terror and continue training nevertheless, you’re still not entirely out of the woods. Now you need to keep coming back, and you need to train in such a way that you bring about the changes you want and make all your hard work worthwhile. That, and you have to try not to damage yourself in the process.

Most people won’t get it right immediately. As a result of being too afraid to go up and ask anybody, and also just being paralysed by the amount of information out there, it can typically take someone new to the gym several years before they settle into a groove and start working out in a way that gets reliable results and makes the best use of their time.

Part of this is the natural learning curve of going to the gym. Everybody needs to find ‘their way’, and this is something that nobody can do for you. Nevertheless though, it’s still possible to learn from the mistakes of others, and particularly by looking at some of the most common problems that people have and avoiding those in particular.

Let’s take a look what some of those are and how you can avoid them.

The Top Mistakes Made by Gym Newbies

Spending Hours Stretching: Many people new to the gym will be eager to do everything properly and so they’ll spend a lot of time reading before they sign up and start attending. That’s good.

The problem is that while doing this research, they’ll probably come across a lot of advice telling them how important it is to stretch properly before workouts, and how effective it is to use foam rollers, and how they should do 10 minutes of jogging before they train. Then at the end of a workout there’s flexibility work to be done and the cool down…

Does that mean that training flexibility isn’t important? That all depends on your goals. But really there’s no need to be doing it in the gym. And the best way to warm up is to just do the movements you’re about to do on a lighter set. Stop avoiding working!

Taking Too Long Generally: Spending too long in the gym is generally actually one of the biggest mistakes that people tend to make. In fact many beginners will spend much longer than even professional athletes in each of their gym sessions. Really, if you’re training for more than 40 minutes at a time, then you’re training for too long. A good workout should be intense enough that you can’t work out any longer than that. Cutting your rests in half is often one of the best ways to improve your workouts.

Forgetting Certain Muscles: Another very common mistake is simply forgetting to train the muscles that aren’t quite as exciting or that aren’t as easy to train. One of the most common ways this happens is that people don’t train their legs, which means they limit their own growth potential and end up with a disproportionate looking body.

While the legs are commonly forgotten, there are many other muscle groups that get ignored. The muscles in the back for instance are commonly left out of new training routines (especially the lower back muscles) and this drastically reduces lifting power while at the same time making you more likely to suffer with back problems. Newbies are very often afraid to try using big compound movements and Olympic lifts, but it’s important that they learn these early on using a safe weight and guidance from a coach.

The triceps are also often forgotten, as are the deltoids and traps… spend some time learning your anatomy and make sure that all of the major muscle groups get a look in.

Focussing on Steady-State Cardio: Perhaps you’re not as interested in building strength as you are burning fat and increasing fitness. In that case you’ll probably be doing a lot of cardiovascular exercise in your training which means running, rowing, swimming etc.

But if this is taking you an hour every time you visit the gym, then again you’re actually just wasting your time. Steady state cardio is generally considered old news now for burning fat unless you’re training for long-distance events. Much more effective is to use interval training, which means alternating bursts of high exertion with periods of relative ‘active recovery’. This might mean for instance that you run for two minutes, then slow down to a jog for three minutes while you recover. Discovering this will save you hours in the gym and greatly increase your rate of weight loss.

Not Focussing on Diet: If your goal is to build muscle, then you need to eat more protein (1 gram of protein for every 1 pound of bodyweight). Likewise, if you want to lose weight, then the most important thing to do is to reduce your intake of calories and probably low GI carbs as well. This is just as important as the work you do in the gym, and probably more so in fact.

Getting the Intensity Wrong: Training too hard too early on will mean you’re training in a manner that you’ll struggle to maintain and you’ll likely give up soon after due to tiredness or lack of time and money. Many new gym goers make this mistake simply because they’re so excited and eager to make progress. Remember to keep it sustainable.

On the other hand though, if you make your workout routine too easy, then you won’t see any progress and you’ll probably become demotivated. Make sure that your training routines are hard work and leave you tired, but be sensible at the same time and make sure that you get rest as well.