Our sleep is something that many of us don’t give enough attention to. Our tendency is to assume that our health issues and other problems are caused by problems in our waking life; that diet, exercise and other active solutions hold the answer. In fact, getting better sleep can improve your waking life in a myriad of potent ways. Sleep helps you to build more strength, lose more weight, increase your energy and mood, remember more, heal wounds, prevent illness and more.

To this end then, if you want to improve your health across the board, improving your sleep is probably a good place to start. But just as when you are awake, there are many different factors consider when dissecting healthy sleep. 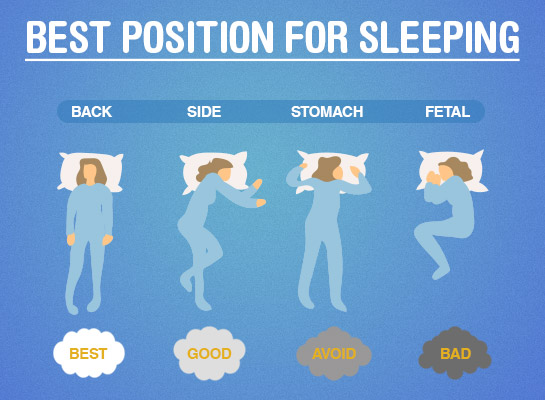 For instance, how much consideration have you given to the position that you sleep in? Choosing the right position can actually impact on the quality of your sleep, on the health of your skin, on the condition of your joints and even of the content of your dreams. It’s about time we took a long hard look at sleeping positions then and which is actually the healthiest.

It is generally agreed by professionals that sleeping on your back is better than sleeping on your front or on your side. That’s because it is more likely to keep your back and neck straight, while letting the mattress support your spine.

As an added bonus, sleeping on your back is also better for your skin. That’s because it lets your face get air, instead of being pressed against the pillow which can absorb oil from your face and then smear it back on you the next night. Studies even show that sleeping on your face can increase wrinkles (1).

On the downside though, if you suffer from either snoring or sleep apnea, then sleeping on your back can actually exacerbate this problem. That’s because gravity will weigh down on your airways, and especially if you have your head tilting forward thus compressing your neck.

So those who suffer with either snoring or apnea are often advised to try sleeping on their sides as a solution.

If you sleep on your side then you are among the vast majority of sleepers. Sleeping on your side is actually the most popular position, though the precise position varies between fetal, curling up and lying straight.

While sleeping on your side generally has relatively little effect for better or worse on your health, sleeping on the left side specifically may have some benefits – it does remove pressure from the lower back and as mentioned it can be useful if you suffer from sleep apnea. For starters, sleeping on the left side is thought to help blood flow to the heart and may be good for pregnant women for that reason. It is also thought to help ease acid reflex and heartburn.

On the negative side, sleeping on the left side also places pressure on the stomach and lungs. The other potential issue is that it can cause a dead arm if you place your arm under your head or body on that side. It’s unusual for this to cause any serious damage, but you should nevertheless be careful and may find it uncomfortable.

Sleeping on your front meanwhile is the best way to prevent snoring as it allows gravity to open up your airwaves rather than closing them. That said though, it is otherwise thought to be the worst position to sleep in. That’s because it flattens the curve in the spine which is liable to cause lower back pain.

In terms of where you place your face you have two options. On the one hand you can lie face down on the pillow which can restrict breathing, or alternatively you can sleep with your head turned to one side. This can then strain the neck as it’s twisted during the night.

At the same time, lying with your face on the pillow can cause it to soak up oil from your skin and small amounts of dirt and dead skin cells. From here, you are then more likely to cause acne and wrinkles as you sleep back on the same pillow time and again afterwards.

How Many Pillows Should You Use?

So it turns out that sleeping on your back is by far the healthiest way to sleep, and sleeping on the side is a close second. Sleeping on the front should generally be avoided, unless you’re in the mood for a bit of dream ‘action’.

So with that in mind, what should you do with your pillows? Well the ideal is to keep the back and neck as flat as possible, and for this reason it’s preferable to sleep with as few pillows as possible – or even none at all. Most of us won’t be comfortable sleep flat on the mattress with nothing under our heads, so a good compromise is to sleep with just a very thin pillow.

How to Control Your Sleeping Position

This is all good and well, but it’s important to bear in mind that we tend to toss and turn a lot through the night anyway. In other words, you’ll be tossing and turning as you sleep and this is partly your body’s way of making sure that you don’t spend too long on one side, that you don’t get a dead arm, that you don’t give yourself backache… etc.

This also means that if you are prone to sleeping on your back, you might struggle to change that behaviour. So how do you go about changing your sleeping position?

One strategy is to use a backpack, a tennis ball, or anything else that you can use to make sleeping in particular ways uncomfortable. Slip a tennis ball under your pyjama top for instance around the back and it will make sleeping on your back uncomfortable, forcing you to sleep on your side – an ideal solution if you snore. Likewise, you can use backpack worn on your front to prevent you from sleeping on your face. You’ll sleep lightly, but after a while you’ll find you train yourself to avoid certain positions and you can remove the backpack or tennis ball once again.