There are a few things that we find rather gross and off putting that can happen to our food. One of the biggest and most disturbing is when an insect of some sort or another lands on it; one of the worst culprits here being the common housefly. They’re everywhere and easy to come by, but unfortunately they’re also particularly disgusting what with being all hairy, crawly and unhygienic. 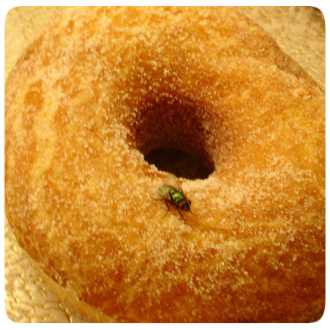 While we feel naturally put off by foods that flies have landed on though, you may be wondering whether there’s actually any reason to avoid the foods they’ve touched or whether we’re just making a fuss. Let’s find out…

What Happens When a Fly Lands on Our Food?

As it happens, flies don’t just look disgusting, but actually are pretty disgusting creatures with a number of bad habits. One of these bad habits is simply loving other really disgusting stuff. That is to say that flies are attracting to things like corpses, like faeces, like rubbish and like stagnant water. And when a fly lands on your food, there’s a good chance that it has just come from landing on some poop. As you might imagine, this means that their hairs can actually still carry traces of faeces and bacteria from those sources and it means that they can end up on your food… not good!

I actually have a friend who works in developing countries to help supply them with fresh water (yep, I feel unimportant too). One of the big issues they have out there is sanitation, and to demonstrate to them how important this is, they sometimes take a strand of hair, dip it into some manure, and then dip it into a glass of water. Then they ask those watching to drink the water. Normally they say no…

Flies also have a slightly bad habit of puking everything. If your dinner date did that, you’d probably leave.

The reason that flies do this is that they can’t chew, and so they need to spit their enzymes out onto the food they plan to consume, and then ‘slurp’ it back up. So when they land on your grub, this is actually what they’re doing.

Flies can carry cholera, typhoid and dysentery and they are actually twice as germ-ridden as cockroaches. So next time you see a fly land on your dinner, imagine it’s a cockroach. Still going to eat that?

All these statistics and scare tactics however probably aren’t going to change the fact that you’re still going to eat that food that you saw a fly land on. If you just bought and cooked yourself a delicious steak, then a fly landed on it, you’re hardly just going to toss it into the trash and get on with your life. In the past you’ve probably eaten tons of things that have had flies on them. And if you have ever eaten food that’s been out overnight (I know I have), then you will almost certainly have eaten foods that have been covered in all kinds of bugs and insects. Not nice.

Note that flies don’t poo every time they land on anything. Also they are very small, so they won’t carry that much bacteria and if they only land on your food for a second, it won’t get transferred across. Also, our immune system and antibacterial saliva does a pretty good job of killing a lot of bacteria anyway.

So if a fly lands on your food, don’t get too upset about it. Wave the fly off and continue to eat. If you see a fly buzzing around your kitchen though, then you should probably kill it to prevent the spread of disease. And if you have any food that’s covered in flies… then just turn and walk away.

Use your common sense people!