Medicine has come a long way in the last few hundred years and while you might not always be satisfied with the attention you get at your local GP, it’s worth remembering just how much worse things used to be back in the day. 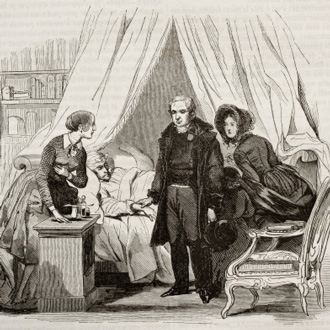 Today we have things like anaesthetic, antibiotics, disinfectant and painkillers that make medical treatments a cakewalk compared to what our ancestors went through. More to the point, while there is occasionally controversy surrounding the effectiveness of a new drug, we also have the benefit of knowing that the treatments we receive are at least somewhat scientifically sound and likely to work. There was a time when they didn’t have a clue what they were doing and pretty much seemed to make it up as they went along.

For your own morbid curiosity then as well as to help your appreciation of the miracle of modern medicine, read on and we’ll take a look at some of the strangest and most nonsensical remedies from days gone by.

For those ‘burned by gun powder’ a simple remedy was believed to be the application of a mixture made from goose and chicken faeces.

Apparently it was also believed that goose poo could be used to treat baldness – all you had to do was rub it on your head. I guess technically you’d be covering up the bald spot, but I can’t see it working beyond that.

To treat cramps you could apparently wrap an eel skin around the affected area. That might sound absurd, but when you consider how many people still believe they can treat cramps by keeping corks in their beds, it’s actually not that bad.

Wearing buttercups in a bag around your neck was once believed to help treat insanity. If only it was that simple…

Unfortunately trying this technique will have the unwanted side effect of making you look insane even if it works. So you’ll have to weigh up your options…

The ‘ague’ is any condition that causes shivering or fever and is often used to describe malaria. To cure any of these conditions, all you need is to take a spider, wrap it in a raisin (I’m not sure how that’s even possible given the dimensions of a raisin) and then swallow both whole.

You’ll notice a bit of a theme cropping up here: many of these treatments involve unpleasant ingredients and nasty procedures. It seems that back in the day we assumed that things we didn’t like or that would be difficult to use would be good for us. Either that or doctors in the Middle Ages were just sadistic…

Sprains, Strains, Back Pain and Rheumatism

Got a sore back? Or a sprained ankle? (Those are the same things, right?) Then all you need is to find four live toads, cook them in boiling water until soft, then remove the toads, boil the remaining water to half a pound, add one pound of fresh butter then add a little arnica.

Interestingly arnica is also still used today as a ‘homeopathic remedy’. Here it is ground into tiny amounts first and then diluted by water, sugar and alcohol. It’s ground into such tiny amounts in fact as to actually technically not be present at all in the end product and as you can imagine it doesn’t really work – like all the rest of these ‘homeopathic remedies’ which are about as scientific as spiders and raisins for argue.

Back in the day when someone got sick a common way to treat the illness was to draw out their blood using leeches. The idea presumably was that they could this way balance the ‘humors’ – the four pillars of medicine according to medieval doctors. Back in those days all illnesses were believed to be caused by an imbalance of blood, phlegm, black bile and yellow bile; too much of any of them would make you sick.

If you got a fever, your skin would often turn red due to inflammation. Thus doctors would conclude you were ill because you had too much blood and you would get some leeches slapped on you.

There are a number of charlatans out there still offering leech therapy as a form of ‘alternative medicine’ who should obviously be avoided. Actually though, leech therapy did make another comeback in medicine in the 70s when it was used to salvage skin grafts threatened by venous congestion.

So there you go! No matter how ill-conceived some of the methods people use to treat themselves are today, at least they aren’t generally quite so grim, arbitrary or dangerous as these. And no matter how bad your medicine tastes, at least it’s not made of spiders!