We rely on our eyes for pretty much everything. Humans are very visual creatures and without our eyesight we would have a lot of difficulty navigating our environment and even eating. Yet many of us take this ability to see for granted and we rarely give a thought to how it all actually works…

Read on then and we’ll look at just how the eyeball actually operates. It’s all actually quite fascinating…

The Basics of the Eye

Often the eye is described as a ‘part of the brain’. More specifically, the retina is the only ‘external’ part of the brain and it fits this description well due to being filled with receptors that are effectively neurons/brain cells. These sit on the inside of your eye and will then become excited and ‘fire’ when they are stimulated by light. 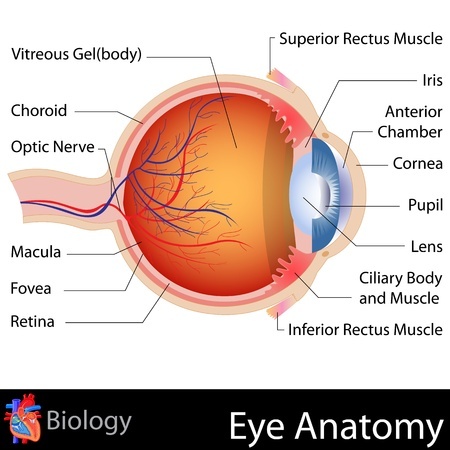 Essentially, you can consider each of these neurons to represent a ‘pixel’ in your vision. It is only through millions of them firing at once that you’re able to make up the whole picture. All this information is then sent to the brain via the optic nerve where it is interpreted and compared to your experience and knowledge about the world.

Now you might be asking yourself what the resolution of the eye might be. If the photoreceptors represent pixels, then what is the ‘pixel density’ of your vision?

Actually though it’s not quite that simple and you can’t really draw a direct comparison between the human eye and say, a camera. The reason for this is that the eye doesn’t have a uniform spread of receptors. Instead, the photoreceptors are far more dense right in the center of the eye – the part we use for focusing known as the fovea – and are lower in number around the periphery. That’s why you need to look at something to see it in great detail and if it weren’t for this then your brain would likely become overwhelmed with all the visual information coming in and you would have difficulty focusing on anything.

Also interesting is the existence of blind spot in the visual filed. An ‘abnormal’ blind spot is known as a scotoma and can have many causes – but actually we all have the same blind spot in our eyes right where our optic nerve is. This is the hole where all of the information about what we’re seeing is fed into the brain and as such there are no photoreceptors here to collect light and information. Our brain uses both eyes and fills in the gaps so that we don’t normally notice this ‘hole’ in our vision.

Most people know that we have more than one type of photoreceptor. The main two categories here are rods and cones, which are slightly different. The rods are slightly narrower than cones and are used for seeing at low light levels. These are only capable of seeing in black and white and exist in greater quantities in our periphery. In extremely dark settings then, we would only be able to see in black and white and our vision would be most accurate around the edges of our eyes. Rods are also more numerous (there are about 120 million of them) and are particularly useful for seeing movement. Their main role from an evolutionary perspective would have been to help us avoid predators after dark.

During the day, we predominantly use our cones to see. The cones are less sensitive but do allow us to see in color. What’s more, they exist in higher quantities in the fovea where our eyes have the highest ‘resolution’.

Finally, there is also a third, less well-known type of photoreceptor. This is what’s called the ‘photosensitive ganglion cell’. It appears not to be used to help us see, so much as to help us ‘detect’ light which the body can then use in a number of ways – specifically in order to modulate our sleep-wake cycles (as determined by our ‘body clock’) and to control our pupillary reflex.

The eye is a multi-faceted and fascinating piece of biological hardware then and is rather amazing in terms of what it allows us to do. In terms of how it operates though, it certainly has some peculiarities that we are mostly unaware of! Hopefully you’ll now have an increased appreciation of your own eyesight and of the pictures that your brain constructs using all this information.