If you’re writing a home workout with the intention of burning fat and toning muscle, then consider the use of circuit training as a way to get your results more quickly and in a more satisfying way.

Circuit training of course involves moving quickly from one ‘station’ to the next. Unlike a workout where you perform sets and reps, you are instead doing a number of repetitions – often timed – at each station before moving onto the next. By doing ‘rounds’ of the circuit, you that way get more than one ‘go’ on each station but you are given time to recover in-between.

When to Use Circuit Training 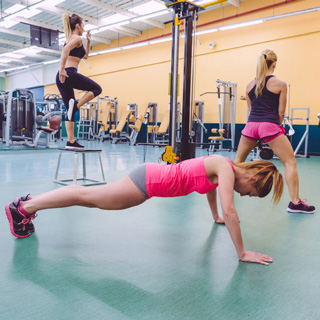 So when should you use circuit training versus a ‘sets and reps’ structure? The answer is that you should use sets and reps predominantly for building big muscle. That’s because the intensity of repeating moves that target the same muscle group in the same way is what’s needed to cause the requisite microtears in the muscle and pump to encourage growth.

But if muscle growth is not your primary concern, a circuit makes it easier to keep moving because you’re constantly changing the exercise. This lends itself to training the whole body and to toning rather than growth.

But writing a circuit does not mean taking any group of exercises and putting them in a sequence! There is a logic here that must be observed if you want to get the most from this type of training. The tips that follow will help you to write training programs for yourself utilizing a circuit structure but also to write circuits for others if they request it.

The first thing to be careful of is that your circuit does indeed target every muscle group. If you’re using one circuit to form the bedrock of your entire routine and you don’t target each muscle group, then you can end up with imbalances and weaknesses that may lead to injury.

You need to ensure that your moves directly or indirectly hit each of the following muscle groups then:

If you hit each of these, then you will have a fairly comprehensive full body routine that you can use on its own as your entire program.

What’s also important is to make sure that you put these exercises in the right order. What constitutes the ‘right order’ though is going to depend entirely on your goals as well as your level of fitness.

Many people using circuits will do so because they are new to using resistance exercise. If this is the case for you, then you will likely want to order your exercises to make them as easy as possible. That means spacing out those moves that target similar muscle groups.

So if you have just worked the pecs, you want to avoid training the pecs again next. Likewise, if you have just worked the shoulders, you might also want to avoid training pecs next, as this will incorporate similar muscle groups. One way to think about this is by dividing all your exercises into ‘pulling’ and ‘pushing’ movements. If you alternate between these, you should find you don’t have any problems.

Of course you may be a bit more advanced in which case you can turn this idea on its head and purposefully stack similar exercises. This way, you’ll go into the next movement already fatigued from the first which will result in a greater challenge. In the world of bodybuilding this is known as ‘pre-exhaust’.

For obvious reasons, more complex and technical movements should go at the start of each round to avoid injury.

How long do you spend on each station? It’s up to you whether you want to count by repetition (10 reps before moving on) or time it (1 minute per station). Both can work equally well but remember that you are trying to keep momentum up – this means that you want to put the rest period at the end of each round and keep it fairly brief.

Of course you also want to avoid the whole thing being too long so factor this in. If you have ten exercises, then there’s only so long you can spend on each station if you hope to get three rounds in. Likewise, there’s only so long someone can keep up their exertion without becoming exhausted. Remember that if someone is panting by the time they come to the press ups, those press ups won’t be great form. There comes a point where going too long without rest becomes detrimental.

Note: Timing each station is great if you want to measure improvement. This way you can count how many reps you performed in the thirty seconds available and then strive to beat that next time.

Your circuit still not challenging enough for you? Throw a spanner in the works with active recovery. This essentially means that your recovery period is still going to involve exercise – only it will be gentle enough to let you catch your breath. A perfect example is ‘plank’ which while a good core workout, doesn’t involve any movement. Crunches can also be a little more restful.

You can completely do away with your rest period and put in active recovery instead. Or you can use active recovery to more subtly make a lengthy workout that bit easier. So if you do have ten exercises in your round, just make sure that number five is plank. See? That’s smart programming!

Some other circuits will incorporate rest periods in between each station. This essentially makes your circuit similar to a high intensity interval training program as you’ll be quickly alternating between periods of exertion and periods of recovery.

It actually is possible to use circuit training to build big muscle if that’s your goal and this can be an efficient way to train. The only difference is that instead of doing a whole body workout, you’ll target just one or two muscle groups in the circuit.

For example, you can decide to focus just on your biceps and then spend the whole circuit doing curling variations and chin-ups. This way you can actually more completely train the muscle from every angle, rather than fatiguing it right from the start with just one range of motion.

You can also perform a circuit using two opposite muscle groups and keep jumping between those two exercises. This way, you will effectively be doing ‘super sets’ all the way through your routine.

A great way to write a circuit like this for the gym is to design it so that every exercise involves the same piece of equipment – this allows you to more quickly transition between moves with no rest and makes your training that much easier and less complicated.

As you can see then, there is a lot you can do with smart circuit training. So next time you are writing a circuit for yourself or for someone else, make sure you give it some thought!