Palm sugar is also known as ‘coconut sugar’ and is often marketed as a healthy alternative to sugar or sweeteners. As you might have guessed from the name, it comes from palm trees, specifically from the boiled and dehydrated sap of coconut palm. It is more expensive than granulated sugar and has the same number of calories per gram.

So what are the benefits of this sugar and do they stand up to closer scrutiny? 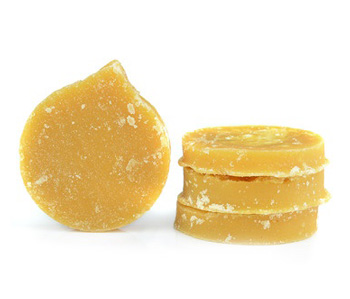 One of the claims surrounding coconut sugar is that it contains more nutrition than sugar. It’s not exactly a ‘superfood’ but it does contain trace amounts of vitamin C, magnesium, phosphorous, magnesium, zinc, iron and copper. On top of that, it also contains phytonutrients: polyphenols, flavonoids and anthocyanidin. It also has vitamin B and antioxidant properties.

However, it’s worth noting that these really are trace amounts. You’ll likely be consuming only small amounts of this sugar and there are even smaller amounts of vitamin C etc. within that. In other words, you’d get a lot more vitamins and minerals from consuming juice, fruit, vegetables etc. and a little sugar isn’t going to make much difference to your total. Still, it certainly is better than your regular sugar that’s just an ‘empty calorie’ with no vital nutrients.

What’s really interesting about coconut sugar though – particularly to low carbers and Paleo fans – is the fact that coconut sugar has a lower GI (glycemic index) as compared with regular sugar (1). For those who aren’t quite up-to-date with their health trends, this essentially means that it takes longer for the glucose to be absorbed into the blood when compared with table sugar. That in turn means that you get a more steady supply of energy rather than a ‘spike’ followed by a crash. It also means you’re less likely to trigger an insulin response and less likely to begin storing extra fat (which insulin encourages). Coconut sugar actually has half the GI of sugar and this is probably due to a substance called Inulin – a type of fiber that slows absorption.

So Should You Start Buying Coconut Sugar?

Before you rush out and spend all your cash on palm sugar though, there are a few things to take into account first.

For starters, the benefits you’re getting for a significantly higher price tag are still not great. You’re still eating sugar, you’re still adding calories and carbs to your diet and you’re only getting a tiny amount of nutrients and a slightly different absorption rate for your money.

Coconut sugar is lower in fructose but contains 70-80% sucrose – which is made from fructose (2). This means that it still causes all kinds of health problems when eaten in excess – including metabolic syndrome, obesity, diabetes, heart disease etc. These are problems that may not exist with something like stevia – though that isn’t a perfect answer either (ultimately, nothing is).

Taking everything into account, the best way to look at coconut sugar is as being ‘slightly better than regular sugar in a similar way to honey’. If money is no object then sure, swap sugar for palm sugar and feel a little smug and superior about it.

But it’s still better to just avoid adding sugar to everything and to get your sweetness from fruit instead!