If you want to mix up your look with something new and different, then getting a body piercing might be an interesting option. While earrings are rather commonplace among women, nose piercings, eyebrow piercings and belly button piercings are considerably less common and are thus more likely to get noticed and make a statement.

But what are the health risks associated with such a piercing? And how can you avoid complications?

Risks Associated With All Piercings

Regardless of the type of piercing you get, there are a few risks to consider. Some of the most common include:

As with any open wound, a piercing can potentially get infected, leading to tissue damage, fever and other issues. Often piercings need to be left in for 6-9 months initially, during which time sweat, dirt and bacteria can lead to infection. These can sometimes lead to cysts, scarring or other problems. Often infection is treatable with antibiotics, though sometimes the piercing will need to be removed entirely. The best way to avoid an infection is to use a reputed professional who uses sterilized equipment. Correct aftercare can also help to keep the area clean, thereby preventing an infection.

Even in the absence of an infection, scarring can occur. Skin tissue tends to heal in varying thicknesses and this can lead to the appearance of scars and other problems around the piercing. These scars can range in severity and again, one of the key factors in determining this is the skill of the technician providing the piercing. It’s worth considering though, especially if you are getting a piercing for aesthetic purposes.

Migration can occur when there’s too much movement around the area. This then results in the barbell (the name of the bar that goes through the flesh) being pushed out by a few millimeters and breaking the skin and often leading to infection. This is most common with belly rings, as the stomach is likely to move a lot after piercing.

If the piercing is not properly cared for, the body may attempt to reject it, again by forcing it out from the body and breaking the skin. In some cases, rejection might occur even when the piercing is cared for properly.

In rare cases, if the equipment being used has not been properly disinfected, this can transmit blood borne diseases such as hepatitis. Again, it’s crucial to ensure that the parlor you use is properly licensed and adheres to the most stringent health practices.

With any piercing, there is some risk of injury. Should the piercing catch on something, this could lead to it getting torn out and thereby damaging the flesh around it. Wearing smaller studs and taking jewelry out at opportune times are two methods to avoid these issues. 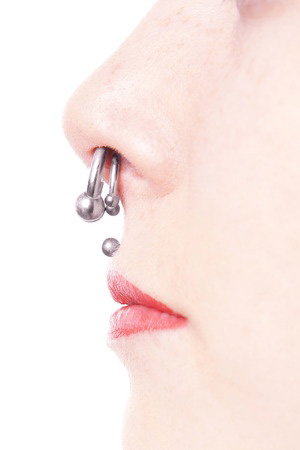 Nose piercings can involve a number of issues specific to the location. More specifically, these problems present themselves for septum piercings. The septum is the cartilaginous divide between the two nostrils. Normally, the cartilage itself is not pierced but rather the soft patch of skin around it. This is significantly less painful but can still to a condition called septal hematoma.

In septal hematoma, injury to this soft tissue around the septum disrupts the blood vessels thereby causing blood and fluid to accumulate underneath the lining. This condition can in some cases eventually lead to more complications, including inflammation that disrupts breathing and even the formation of a hole in the septum leading to congestion. In severe cases, the nose can collapse resulting in a deformity known as ‘saddle nose’. Saddle nose is rare and treatable with rhinoplasty but still a highly unpleasant experience.

A ‘flesh hole’ is created by purposefully stretching a piercing in order to create a complete hole in the earlobe or sometimes in other areas. The process is generally considered safe, though issues can occur if it is rushed. Individual differences in skin elasticity and vascularity can also have a role.

Another consideration is the ‘point of no return’. This is the size at which an earlobe piercing will become ‘permanent’ and never shrink back to its original size. For most people this number is anything over 0g or 10mm. However, in some cases ears won’t heal back from a 2g. Again, this depends on the individual and the speed at which the hole is stretched. Proceed with caution if you intend for the process to be reversible. Rubbing vitamin E on the stretched lobes can also help encourage elasticity. 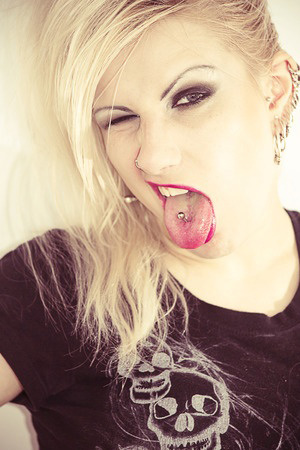 Other than a small potential for choking, the main risk associated with a tongue piercing is the damage it can potentially do to the teeth. During the first couple of days following a tongue piercing, speaking may be difficult. Following this, it is not uncommon for the teeth and gums to become damaged by the piercing. Dental fracture reportedly affects around 14-41% of recipients.

The best way to prevent these issues is to ensure careful and thoughtful placement of the piercing. At the same time, it is important to avoid using a barbell that might risk moving around inside the tongue.

While eyebrow and anti-eyebrow piercings are generally safe, it’s important to choose the location of the piercing carefully. Piercings directly above the eye can otherwise risking the damage of the supra-orbital nerves.

With all these potential risks including everything from infection, to hepatitis to nerve damage, you might be thinking twice about getting a body piercing. Keep this all in perspective though: these are all potential complications and will not affect the majority of people. Most complications are reversible and by choosing a licensed professional, many of the associated risks can be avoided.

Just make sure not to carry out these types of piercings at home and follow the after-care advised.