Elderberries (also known as Sambucus) are dark blue/purple berries and are one of those ingredients that have been used for centuries for multiple medicinal purposes, you know the story. They’re also a relatively common fruit that you’ll likely have eaten on several occasions already. In terms of medicinal use, elderberries have historically been popular through North America, Western Asia, North Africa and Europe during the Middle Ages and were used to treat a variety of conditions.

Today we know that these berries are packed with powerful nutrients and can provide numerous health benefits beyond other similar ingredients. Their rich color is a clue to their nutrient density, as is their sweet flavor. 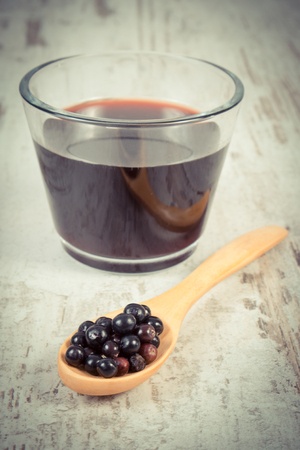 Elderberries are brimming with antioxidants to help prevent damage to the cells and slow the visible effects of ageing. This is at least partially thanks to the presence of anthocyanin, which is also what gives them their dark, vibrant color. Anthocyanin is such a powerful antioxidant that it actually helps the berries to remain fresh for longer periods while directly exposed to the sun’s UV rays.

Berries in general are well renowned for their impressive antioxidant properties but elderberries are ahead of the pack and are twice as effective in this capacity as blueberries or cranberries. This is revealed by their high ORAC score (Oxygen Radical Absorbance Capacity).

Elderberries aren’t just full of anthocyanin however. They’re also stuffed with vitamin C (also an antioxidant) and actually contain more of the vitamin than an equivalent amount of oranges. They’re also packed with a range of important trace minerals and have been linked to improved immune health, better brain function and a reduction in cancer.

Anthocyanins have benefits beyond antioxidant effects however and also has antiviral properties. This is because they can boost the production of cytokines – important agents of the immune system and key messengers that regulate the immune response. With the help of elderberries then, the body is more capable of combating a range of diseases.

Likewise, anthocyanins can also enhance the function of the mucous membranes and reduce inflammation-associated swelling. This makes elderberry a perfect choice when fighting cold and flu symptoms.

In one study (1), it was found that patients who consumed elderberries would on average recover from flu symptoms four days earlier. It’s worth noting at this point however that this study had a relatively small sample size and more research needs to be done before we can draw firm conclusions.

Elderberry anthocyanins may also have a beneficial impact on the blood vessels. This is because blood cells contain a substance called endothelium in their inner membranes. Endothelium encourages the absorption of anthocyanins which helps to protect them against inflammatory stressors. In turn, this can improve circulation and reduce the likelihood of heart disease, stroke and high blood pressure.

Adding Elderberries to Your Diet

So, are elderberries a genuine superfood?

While the term is a rather arbitrary and contentious one, this certainly is an ingredient that can bring numerous benefits to your diet. If you’re looking to support your immune system, to protect against cancer and to combat cold and flu symptoms then these dark blue berries might be a good choice.

Just make sure that you continue to eat a wide range of fruits and vegetables to get the widest range of benefits and be wary of eating too many elderberries… they’re also laxatives!