To say that a substance can ‘cure’ cancer is highly misleading. There is currently no known cure for cancer and if there were, you can rest assured you would know about it by now.

There are many treatments for cancer but currently the most effective of these include chemotherapy and surgery – both of which are invasive and dangerous in their own right. Likewise, it is also true that certain changes to the diet may help to prevent the offset of cancer and even aid recovery. However, it’s again crucial to emphasize that these are not ‘cures for cancer’ and nor are they suitable alternatives to chemotherapy or other treatments. 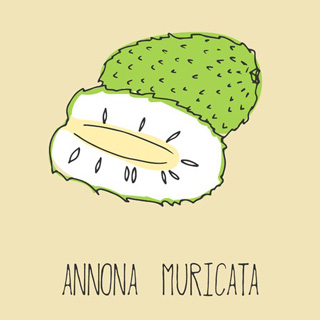 Cancer costs the economy far more than any organization stands to gain from selling ineffectual drugs. There is no conspiracy. Doctors prescribe what they know to be the very best treatment for the condition with the best chances of recovery and it is very dangerous and foolish to disregard their advice.

So can guanabana cure cancer? Certainly not. But let’s take a look at its health benefits and whether it might be a useful supplement in the fight against this destructive disease.

Guanabana is also known as graviola, custard apple, cherimoya, Brazilian paw paw or ‘soursop’ and is a popular food and drink in Africa, South America and Southeast Asia. Its scientific name is Annona muricata.

Guanabana is a dark green fruit with a sweet taste and a speckled skin with soft, curved spines. It is also a highly nutritious fruit thanks to the nutrients calcium, folate, potassium, sodium, vitamin B, vitamin C and iron. The main active component however is a phytochemical (plant compound) called annonaceous acetogenins.

Guanabana as a Cancer Cure

So where do the anti-cancer claims surrounding this fruit come from? It essentially boils down to studies that show how the graviola extract can kill specific types of liver and breast cancer cells in laboratory conditions – cancer cells that are resistant to some of the main chemotherapy drugs.

We cannot extrapolate this information however to support the use of graviola capsules in treatment of cancer and no major cancer research organizations recommend its use. There is no evidence that using supplements would provide the right quantities of the active ingredients, that it would be able to target the cancer cells effectively or that it would even have any effect on human patients.

What’s more, there may be side effects associated with the use of graviola. Some chemicals found in guanabana are thought to trigger nerve changes and potentially to lead to movement disorders when taken in large quantities. It may cause nerve damage and in some studies it has been found to lead to symptoms similar to Parkinson’s disease.

It’s likely that guanabana is perfectly safe in moderation but when taken as a supplement these risks might be more prevalent.

The bottom line is that you cannot take one study out of context and use that as a basis to sell an expensive exotic fruit. This is particularly true when there are more studies that demonstrate potentially serious health risks surrounding the very same ingredient.

At this point there is really only one thing that guanabana has going for it: it’s very fun to say.