Polycystic ovary syndrome is a condition affecting the ovaries. PCOS is believed to be very common and to affect millions of women and possibly up to one in five. It can also vary significantly in severity with a variety of effects. As many as half of affected women experience PCOS with no symptoms whatsoever.

What Is Polycystic Ovaries?

PCOS causes cysts to develop on the ovaries, which interferes with ovulation. This may prevent ovulation entirely or it may simply make it less frequent. Finally, PCOS is also associated with an increase in the amount of male hormones, known as androgens, in the body.

The cysts themselves are actually harmless and vary in size up to 8mm. These are caused by underdeveloped sacs in which the eggs would normally develop. In this form, they are unable to release the egg, which means ovulation doesn’t take place.

The symptoms of PCOS normally come on during the late teens or early twenties and include:

PCOS may also increase the risk of several other health problems in later life, including type 2 diabetes and high cholesterol. 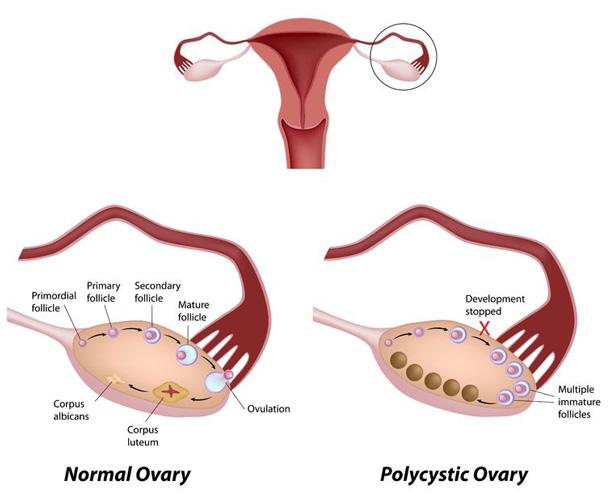 The precise causes of PCOS aren’t known. However, it commonly runs in families and is generally associated with abnormal levels of other hormones, including insulin. Many women with PCOS produce increased insulin due to a level of insulin resistance, which in turn increases the production of other hormones – including androgens. Weight gain actually also increases the amount of insulin the body produces, which can lead to something of a vicious cycle as insulin causes weight gain and insulin resistance leads to low energy.

There is no known cure for PCOS, however there are various methods that can be used to manage symptoms and prevent the condition from worsening. Weight loss for instance can be helpful where insulin is responsible, so exercise and a healthy diet are recommended. In some women, a drug called metformin can be used to great effect aiding weight loss and even improving menstruation and sensitivity to infertility drugs such as clomiphene.

Medications can also be used to aid specific symptoms, including increased hair growth and irregular periods. Oral contraceptives may be helpful in encouraging more regular periods (though the pill is contra-indicated for overweight patients).

Fertility medications can be used to encourage pregnancy. Where this is ineffective however, a surgical procedure called laparoscopic ovarian drilling (LOD) can be used to destroy the tissue in the ovaries producing androgens. This will allow women to get pregnant in around 50% of cases but is generally not a permanent solution. It is carried out via a small incision and patients can normally resume normal activities within 24 hours.